So Matt asked me to sketch a few more characters. I was going to wait until I finished reading the novel, but after meeting Cartrite I had these images of characters in my head and wanted to get them on paper. 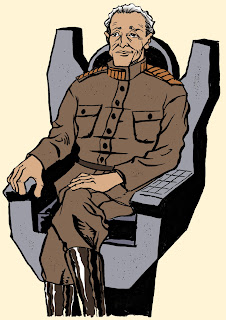 First is Cartrite. He's orchestrating the takeover of the entire galaxy by setting up a government that is destined to fail and then stepping in and saving the day. It's a rather brilliant yet insidious plot. What's scary is it could so easily happen in real life.

I based his costume on Stalin's uniform and the face is a composite of two white haired actors. I bought a new skinny brush that I used for the first time on this face to create more delicate lines for faces and hands while going for thick lines for the clothes and chair. It provides a nicer line weight contrast than I usually have.

The next character is Rusty. He's the proprietor of a space station where weary travelers can stop and repair their ships and themselves. In the story he gives Jak first class treatment, but Jak suspects there's something not entirely altruistic in his motives, and of course he's right; Rusty wants something--something big.

I based his look on a couple of different characters. I thought a medieval type garb would fit the innkeeper nature of the character. I pictured him as being short and round, but I wasn't sure about the hair. This version shows it well kept, but I did consider making him much older with out of control hair. I'm not sure which is better.

If you haven't had a chance to read Jak Phoenix and you enjoy old fashioned space operas, do yourself a favor and pick it up. The story is great! The characters are more memorable than the typical space opera character. The adventure is interesting and varied. The only criticism I have is the writing: it's not as efficient as it could be, some parts a little overwritten, and a few awkward phraseologies pop up here and there, but not enough to get in the way of enjoying the story.