Energy Crisis and Other Buzzwords 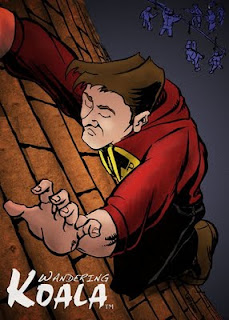 I haven't posted much lately, because I've been busy finishing up my latest novel, Power Trip (a Wandering Koala tale). I've written two separate prologues for it--one is a history and this one is about seeing thru the rhetoric--and I'm contemplating a third that focuses more on the science. Here is the second version. Let me know what you think. And the picture is an illustration from the novel.

“And that’s the point of public relations slogans like ‘Support Our Troops’ is that they don't mean anything ... that's the whole point of good propaganda. You want to create a slogan that nobody is gonna be against and I suppose everybody will be for, because nobody knows what it means, because it doesn't mean anything. But its crucial value is that it diverts your attention from a question that does mean something: do you support our policy? And that's the one you're not allowed to talk about.” ~ Noam Chomsky, American linguist

People love buzzwords. Buzzwords are words that elicit an immediate emotional response so you feel instead of think. Examples include “unconstitutional” and “un-American” in politics, “ROI” and “Web 2.0” in business, “cutting edge” and “remastered” in entertainment, and “renewable” and “sustainable” in energy. Numerous policies have been set based on these last two and have had a significant effect on several industries. But what do they really mean? Are people using them correctly?

With regards to energy, renewability simply means the source of power will replenish itself so there will be more to use later. According to current theories, fossil fuels were formed from plants, which store solar energy, were then buried in the Earth and transformed over millions of years. When they’re gone, they’re gone (at least for the next several million years). Calling them non-renewable (which they are) creates the assumption in people’s minds that we’re going to run out of them really quickly, which is a misconception. There are enough known fossil fuels in the Earth’s crust to last the world at its current rate of usage for the next several centuries. In this case, the buzzword is purposely used to mislead and distract from the real issue: certain parties want to switch the power and funding from current energy producers to different energy producers.

Sustainability is a very similar concept. It means usage equals replenishment so we won’t run out. (It’s ironic that a government that pushes for and funds sustainable energy doesn’t apply the same principle to sustainable spending and balance the budget.) The arguments for it are nearly the same as for renewability.

When people say these words, another concept, pollution-free, is implied and you are supposed to assume that, but it’s rarely stated, because no source of energy has ever been pollution free, not even the so-called “green” energy, nor will it ever be. No source of power is 100% efficient, and therefore every one will produce some waste.

Horse power (and other beasts of burden). A typical horse can produce between 15 and 35 pounds of manure per day. The waste attracts flies, and when it dries up, it becomes airborne. In the nineteenth century, houses were built with a second story entrance because the piles in the streets were so high.

Wind. Each part of a windmill requires its own big rig to haul it in, which creates a sizeable amount of pollution. More big equipment must be brought in for constant maintenance, further adding to the negative environmental impact. Wind farms also attract birds and their associated waste and regularly chop up the birds. But worst of all, they destroy the vista for miles around, hurting everyone.

Water. Hydroelectric power has the unfortunate effect of permanently altering a river’s ecosystem.

Nuclear. Nuclear power produces radioactive waste, which could be reprocessed with around 90% being reused, leaving little to be stored. Because reprocessing is also the process used to create weapons, the US banned it in 1976. This single act created more nuclear waste than quadrupling the number of stations would have.

Technology has greatly reduced the negative products resulting from energy production, and will continue to reduce them further in the future.

Both renewability and sustainability are important, but there’s one word that is just as important, if not more so, that needs to be included with them: capacity.

People require certain levels of power and any source that can’t supply the required levels is not going to be a viable option, no matter how much its supporters want it to be.

Two of the most popular sources of “renewable” and “sustainable” energy are wind and solar. It doesn’t appear that we will run out of either in the next several thousand years. But do they have the capacity to meet current and future needs?

Wind. The Horse Hollow Wind Energy Center located in Texas is the world’s largest wind farm. It boasts 421 wind turbines spread over nearly 47,000 acres of land (just over 73 square miles) and produces enough energy to power approximately 220,000 homes per year. From 2005-2009, the number of households in the US was 112,611,029. So to provide power to just the homes in the US would require over 24 million acres of land (an area larger than the State of Maine) assuming the wind never stopped blowing so the turbines could spin at maximum capacity. That doesn’t, however, include power for a single business, church, government entity, or recreational facility which typically use considerably more power than the average household. To reliably power the country would most likely require a wind farm the size of the eastern states.

Solar. Solar cells are photovoltaic cells (photo meaning “light” and voltaic meaning “electric”) made of a material called a semiconductor that converts sunlight into electricity. The basic principle is pretty simple: When sunlight (or any light) strikes the cell, part of it is absorbed within the semiconductor material and knocks electrons loose, allowing them to flow freely. The freed electrons are forced to flow in a certain direction creating a current.

Solar power is very seductive, because the sun gives off approximately 1,000 watts of energy per square yard of the planet's surface on a bright, sunny day, which is easily enough to power our homes, offices, and other activities. Unfortunately, no one has invented a solar cell that can capture even a fraction of that power. In May 2011, Oak Ridge National Laboratory announced a design that should provide a 3.2 percent light-to-power conversion efficiency, which is a substantial improvement over the meager 1.8 percent offered by today's photovoltaics, but still a far cry from what would be needed to make solar power commercially viable. Someday the technology will be reach the necessary level, but it may not be in this century.

Energy crisis is another buzzword you’ve probably heard a lot of talk about recently, but it’s nothing new and nothing unique to our time. In the 1970s the country was in a panic with the same worries we face today and politicians used the same rhetoric. But the energy crisis wasn’t new for that time either. Nor was it new at end of the nineteenth century when cities faced the same problems, albeit in a different form, that we do today.

There is an energy crisis, but has nothing to do with having too little power—the world currently has the ability to produce more energy than it could possibly use: nuclear power is virtually unlimited, enough oil exists in the Earth’s crust to last us centuries at our current levels of use with reckless abandon, and hydroelectric power continues to power cities for at a lowest possible cost.

No, the problem stems from certain parties not wanting to use the cheap and abundant sources that already exist and using legislation to limit them. They claim we must seek new forms of energy that are environmentally responsible, renewable, sustainable, and nonpolluting. Basically they’re on a hunt for a unicorn, a mythical creature people want to exist but doesn’t, and they don’t seem to care about the negative impacts their crusade is having on the economy (such as food prices tripling in some places due to increased energy costs).

So what is their real agenda? And what is it going to cost you and me?
No comments: