Putting It All Together 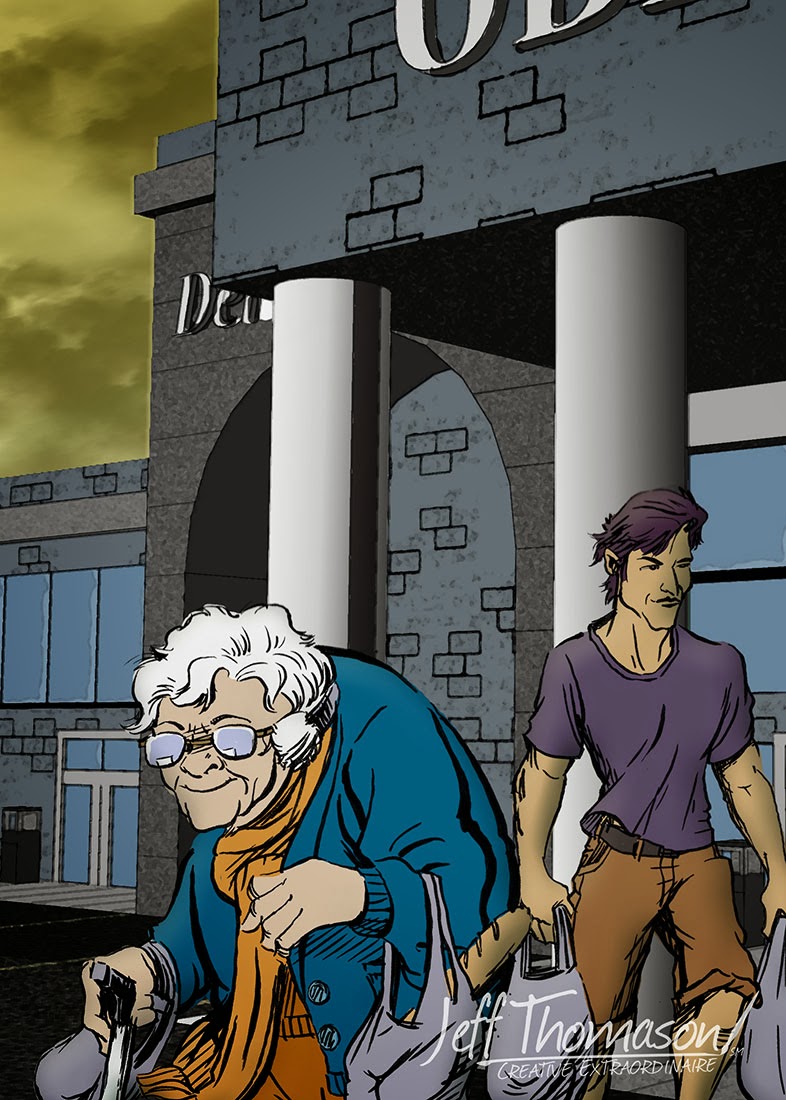 I've been working on a new style for my characters and a new style for backgrounds. I finally put the two together and came up with this. It was inspired by a trip to the grocery store this week. It was about 40 degrees. I noticed a little old lady all bundled up walking out of the store and a young guy in a t-shirt and shorts behind her. The contrast made me laugh. Temperature is definitely relative.

Let me know what you think. 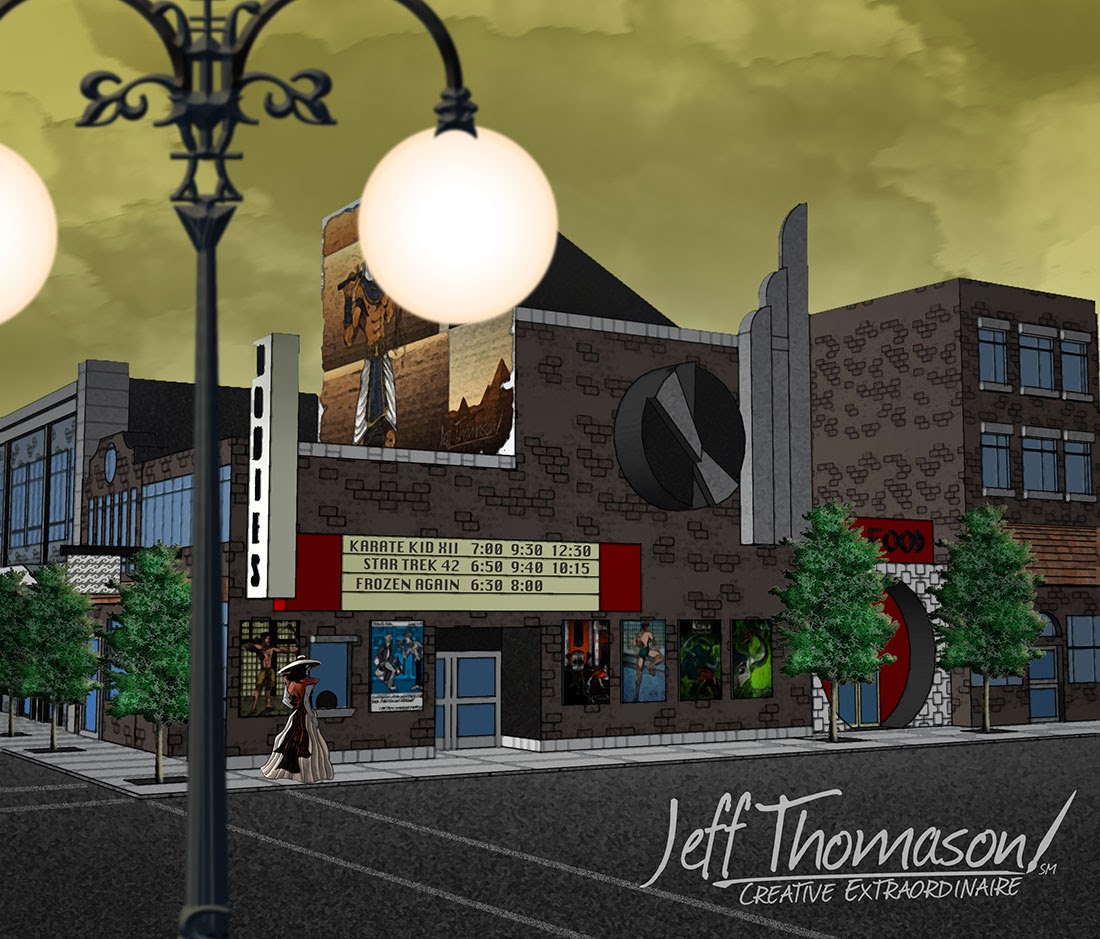 Here's another view of the town I spent three days building. I still need to name it. 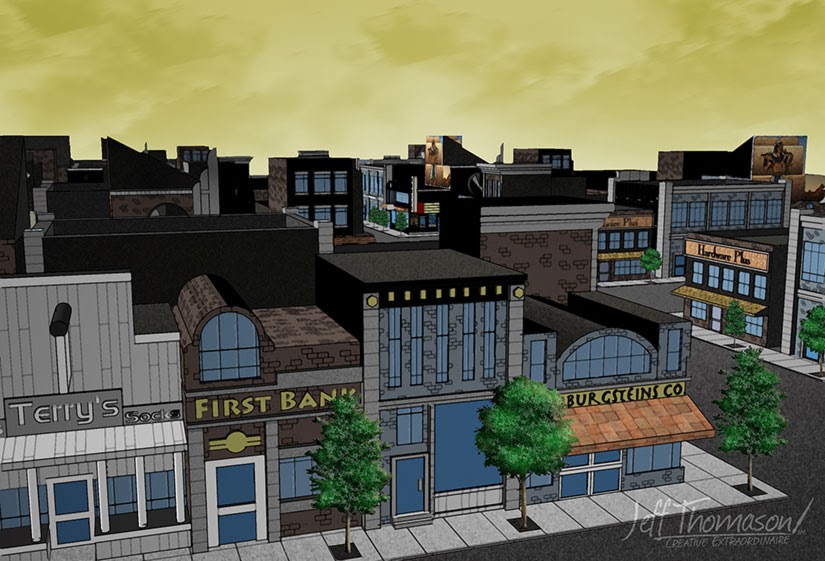 Something I've really been struggling with is backgrounds. I'm just not sure what I want the backgrounds in my work to look like. I've tried many styles and techniques, but I have yet to come onto one that makes me jump up and yell, "Eureka!"

The above image is one of my latest attempts. It's completely digital--a mix of Google SketchUp and Adobe Photoshop.  It took me three days to build, but now I have a whole town that I can twist and turn and photograph from all angles.

I've created digital backgrounds before (just look at my most recent posts), but this one is different, because it has a painterly feel to it and a storybook vibe which I kind of like. I'm not sure if this is the direction I will pursue, because there is another very different style I'm also exploring, but I do like it and it does offer many advantages.

But I'd love to hear what you think.

Previous posts have followed the evolution of the cover for the latest Wandering Koala Digest. I did like the original try, but not for a main cover image, so I used it on the back cover. It makes an excellent back cover, because it looks good, but it's also simple enough that it can be covered up with the barcode and book description without obfuscating what it is. 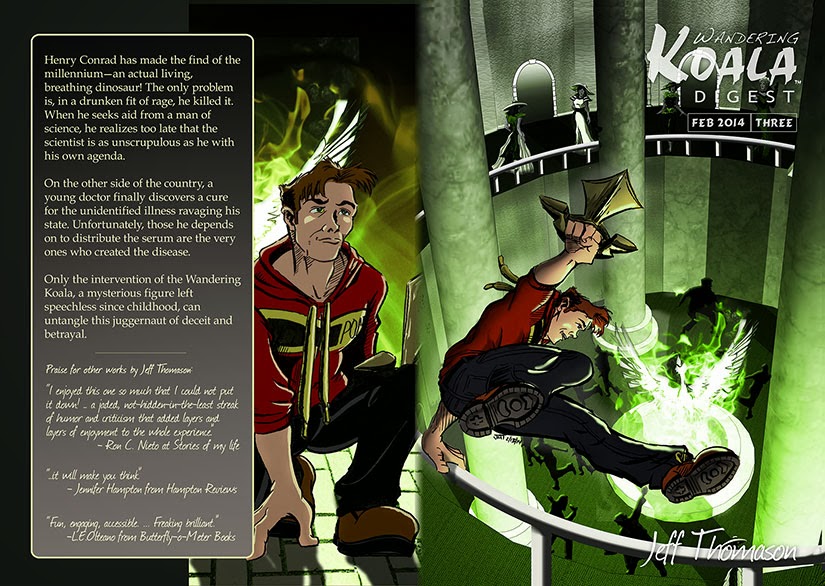 A couple of posts back I posted a potential cover image. When I created it I thought it was great. Then I looked at it the next morning and wasn't as impressed. And judging by the weak traffic to the image on DeviantArt, neither was anyone else.

The title of one of the stories in the latest issue of Wandering Koala Digest is Mistakes, so the title of this post is a bit of a pun. The first cover was a mistake, but instead of pushing ahead with it I decided to start from scratch and create a new cover. And boy am I glad I did! 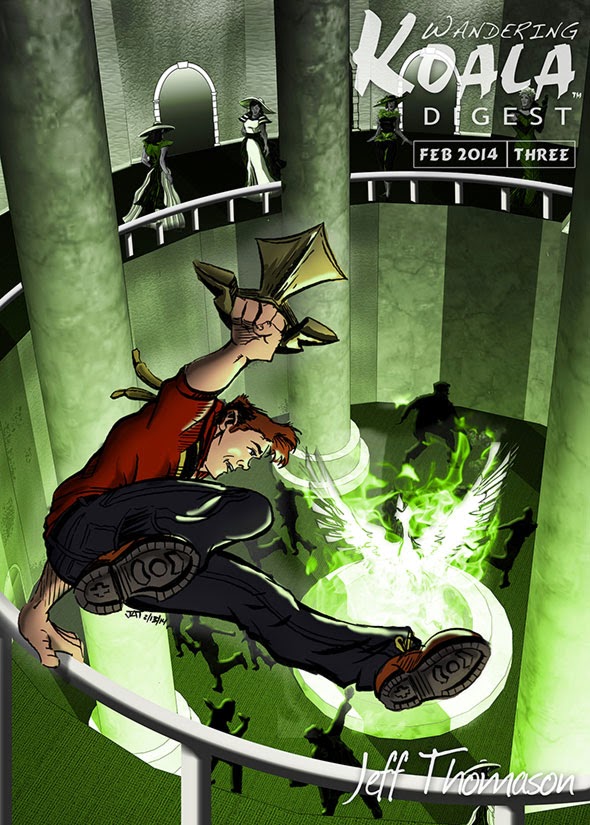 The figure was drawn with a pencil, inked with a Pigma Graphic 1, and colored in Photoshop. The background was created in Google Sketchup with textures from Photoshop. The figures are from previous projects. The phoenix and fire are from the original try.

I am really happy with how this turned out. This is a style I could get behind. What do you think?

Coming up with a catchy summary that both tells enough to hook the reader but holds enough back to not give everything away is a challenge. Below is the description of my latest publication, Wandering Koala Digest 3. The illustration was created in Corel Painter.

Henry Conrad has made the find of the millennium—an actual living, breathing dinosaur! The only problem is, in a drunken fit of rage, he killed it. When he seeks aid from a man of science, he realizes too late that the scientist is as unscrupulous as he with his own agenda.

On the other side of the country, a young doctor finally discovers a cure for the unidentified illness ravaging his state. Unfortunately, those he depends on to distribute the serum are the very ones who created the disease.

Only the intervention of the Wandering Koala, a mysterious figure left speechless since childhood, can untangle this juggernaut of deceit and betrayal.

Art Philosophy: The Next Morning 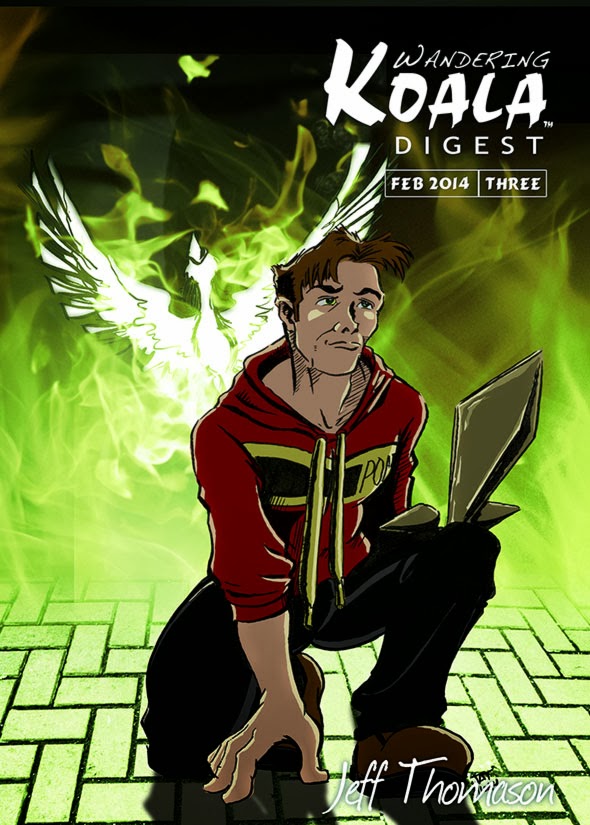 I'm always amazed at what a fresh perspective can do.  Often I'll finish a work of art and think it either looks great or terrible, and the next morning I'll wake up and look at the same work and think just the opposite. I'm sure the art didn't change (although art gremlins sneaking into my computer and altering my illustrations would explain a lot). The illustration above is just such a case.

I'm finishing up the latest issue of Wandering Koala Digest and have everything ready except the cover, and the cover is probably the most important part, because it is what will catch the readers' attention or wave them off and away. The image above is my first attempt. I thought it looked pretty good last night when I went to bed, but this morning it's disappointing. The drawing is nice. The composition works. The colors are unique. But it doesn't seem catchy and inciting enough. Which means I need to come up with a second version. And it also makes me glad I didn't rush out and publish the work without taking a second look at the cover.

I remember in art school how one of my instructors told me he would set up a painting at the end of the room so he'd see it first thing every morning for several days. This allowed him to see the work with fresh eyes and catch things he missed initially but those looking at it later would catch. It's a good technique and practice, although a bit of a luxury in the commercial art world were work is literally being pumped out with tight deadlines.
No comments: 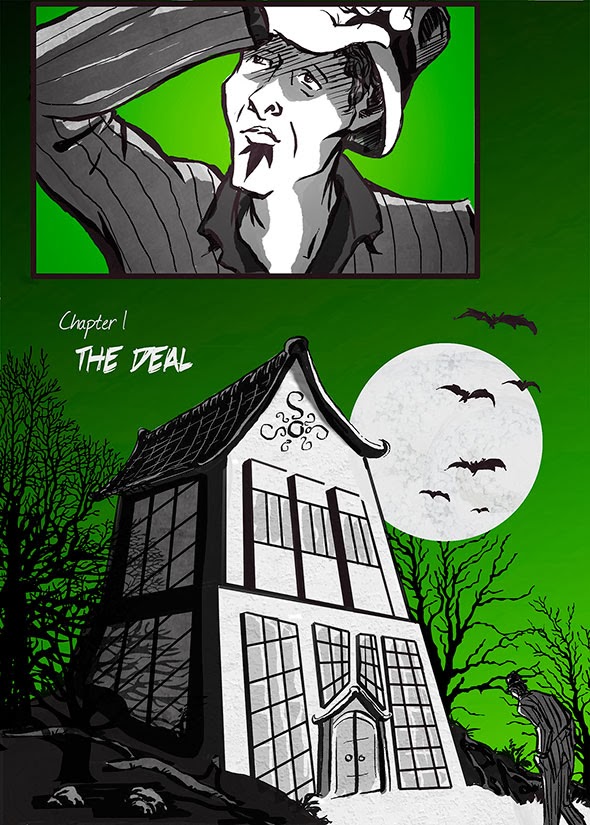 One of the great things about fiction is the ability to create imaginary worlds. (And if you saw the last State of the Union address, you'll note imaginary worlds aren't limited to fiction.) Fiction gives both the author and the reader the opportunity to explore worlds that don't exist but wouldn't it be wonderful if they did? One can travel thru time, space, and cross any dimension and explore the many 'what ifs' that one could come up with.

German Expressionist films of the 1920s were especially groundbreaking in this regard (as were the films of George Melies). Most early films (and most films today) are set in the normal world and involve normal, everyday tasks. German Expressionist films were some of the earliest to create a world made out of expression and emotion. It was this genre from which I drew inspiration for this latest tale.

German Expressionism is known for its odd angles and distorted perspective as for its arbitrary use of color. And they tend to lean towards the horror and macabre. I thinks you can see a little of each in the above illustration.

I'm still really liking the style, but I wonder if the digital inks are too cold and lack humanity. Part of me really digs them, but part of me misses the warmth and craft of the traditional. I'll have to do some more sketching.