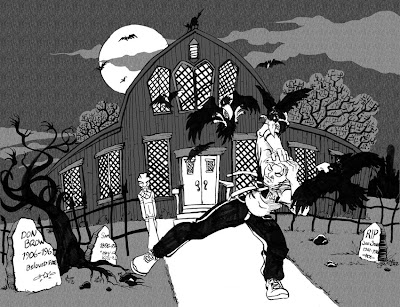 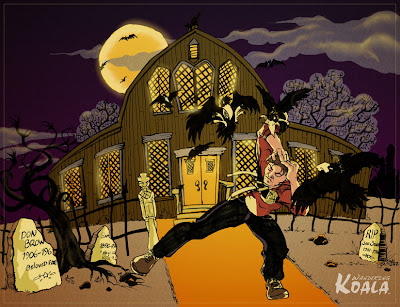 I'm a great lover of black & white artwork, but there is something about color that compels me. Whenever I create a new work, I'm usually torn about whether it should have color or not. Black and white seems to be stronger artistically and design wise, but it always looks unfinished to me. Is it just me, or is it because we live in a colored world and that's one element you just can't remove?

Halloween and the Return to Traditional 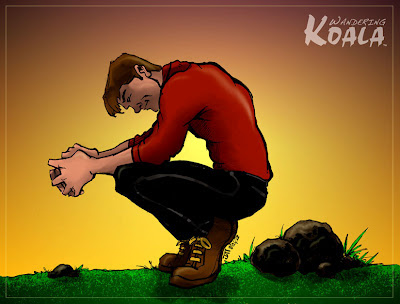 Fall is one of my favorite times of year. In this part of the world, the air is chilling, the leaves are falling after putting on a new shade, and the new TV shows are starting. And Halloween is right around the corner.

Halloween is one of my favorite holidays, and I'm not sure why. Is it the costumes? The candy? The Jell-O popcorn balls? The whole jack o'lantern, witches, skeletons, bats, cats, etc. that goes along with it? Probably a combination of all the above. 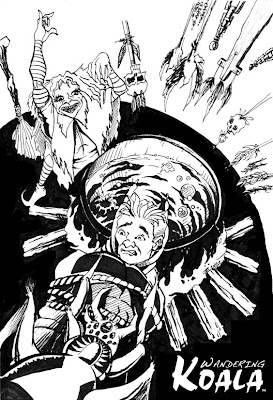 One of the things I love to do at Halloween is create Halloween-themed illustrations. Usually I get so busy that I don't start until the day before. Needless to say, I've created very few in the past.

But this year was different. This year I'm working on a new story that I've hinted about in other blog posts. But for it I wanted a more refined and higher quality illustration than I've used in the past. That meant I needed to draw more, but not just fun little sketches. I needed to draw great illustrations.

Recently I've been trying to move to a 100% digital workflow. There have been a lot of nice things about it, but the drawing itself just never seemed to be exactly what I wanted it to be. There is too much temptation to be sloppy, to just lay down lines and shapes without thinking them thru because they're so easy to change, and an overall lack of real texture. So I decided to try moving back to traditional media. And the results have been good. Really good.

I've been using a calligraphy pen, something I stumbled onto back in college when I was buying all sorts of art supplies to experiment with. On of the supplies was a calligraphy dip pen for lettering. For some reason I decided to try inking a drawing with it. And I loved the result. But I hated the mess. So I got a calligraphy pen with its own ink supply. I really liked how it crated shapes and how quickly I could ink with it. What I didn't like was the line quality. It seemed so lifeless. Over the years I experimented with other tools and other line qualities, but I never found exactly what I was looking for, not even in digital.

Recently I pulled out a calligraphy pen (not my original one, because that one had been stolen along with a lot of other things when the house I was living in was burglarized, but that's a story for another day...) and started to sketch. I really liked the shapes it made. This particular pen made a thin enough line that I had to go over it a few times to build up the thickness I needed. And in doing that, the line became more naturalistic and had some life. Was it the perfect line? No. Was it a great line that led to great illustrations? Yes!

Above and below you can see some of the recent illustrations I've been working on. None of them are mere sketches. Each has a mood, a background, and each tells a story. I even went back to my old black & white ways, something I haven't done recently but keep meaning to. The color is still laid in digitally, mostly because physical media doesn't scan as well as I'd like it to, although I think the oil pastels might...

Anyway, enjoy my latest work and return to physical media. And these are only the beginning. 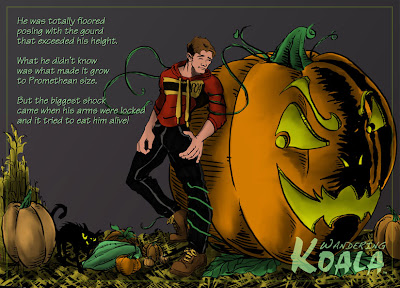