Music and the Written Word


There are very few things as magical as putting the right images with the right music. I'm not saying that I did that, but I am pretty happy with the result. The music is a tune I composed several years ago using Apple Loops. The video was generated in Apple Photos using pages from my first Adult Coloring Book. Enjoy!
No comments:

Storytelling: How long should a story be? 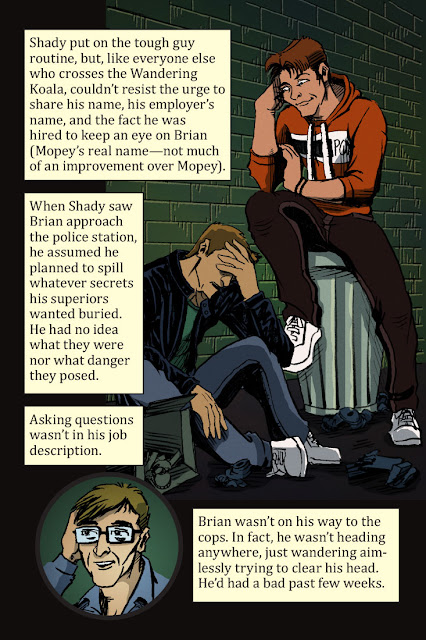 Recently I let a friend of mine read my latest story before I published it. He came back with feedback that I hear a lot about not just my comics, but comics in general. "It's too short. It needs more character development. It needs more backstory."

Almost every negative comment I get has to do with length and the fact that characters aren't "completely developed". I blame TV and movies. TV shows with "fully developed" characters tend to run in the hour range (with 15 minutes for commercials). Movies typically run 90-120 minutes. That's roughly 6-8 typically comic book issues. My friend has written a screenplay (like so many others) and while he did it, he obtained a lot of guidance from someone who has sold screenplays. He basically learned the formula (you must have certain elements, they must be introduced by a certain point in the movie, etc.) Commercially successful movies tend to follow the same formula, and I think people have come to expect that in everything and have actually subconsciously set that as the criteria against what all other media is judged. A lot of novels have gone to the "screenplay" format to both attract readers and movie studios for this reason. So when you try to do something different (like tell a short story or focus on something other than the main character's backstories) people assume that it is "bad" because it isn't what they've come to expect.

Not everyone does this. Some people realize there are different types of stories, such as the concept story, and developed characters actually detract from that. I personally get a little bored with the traditionally formula that is used so often. It makes it so much easier to predict the twist endings, and while that's fun, it gets old after a while.

That's one reason I decided to go with 80-pages for a story instead of the traditional 18-22. It allows a much more developed story in one sitting that you don't have to wait until the next issue to continue. That break can be jarring. 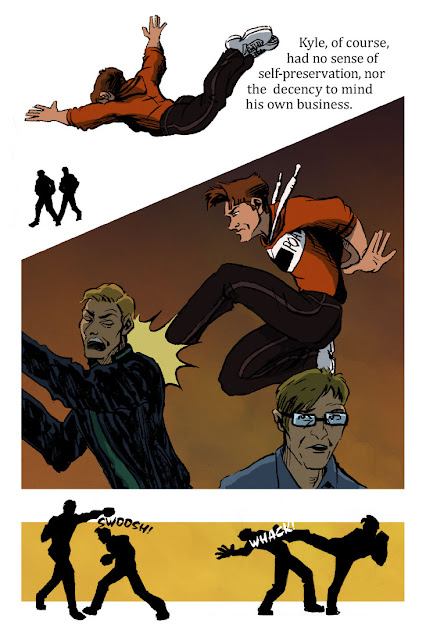 Another page from the latest Wandering Koala adventure.

Read the entire story >>
No comments:

A few years ago I was reminiscing about how much I loved coloring books as a youngster. I couldn't get enough of them. I wondered why they weren't made for adults and thought about all the cool things you could do with that format. But I never did more than that, because I figured it wouldn't catch on.

I should have known better and trusted my instincts. They're almost always right. 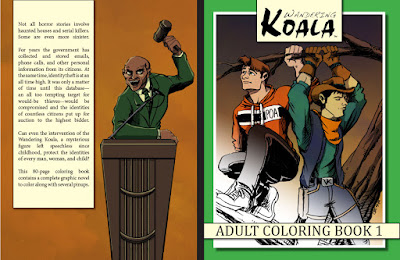 Just a couple of years after I had that thought, the Adult Coloring Book market exploded! I see them for sale all over the place. But most of those are just coloring books with a series of images to color. They didn't go beyond that.

I created an entire graphic novel that one can color with a gallery at back with several pin up images. That way not only do you get a log of great art to color, but you get an entire story to read as well. It's like a two for one! 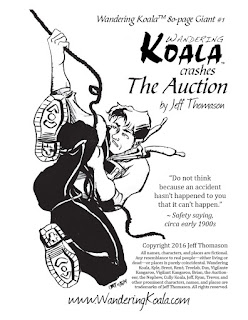 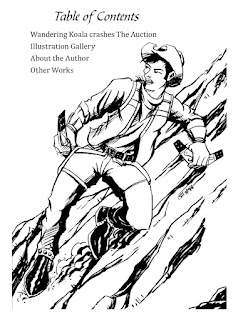 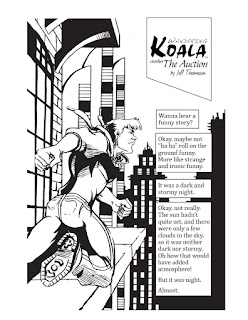 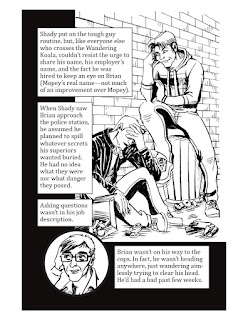 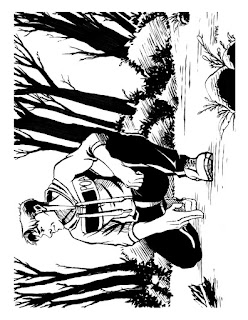 This is just the first in a series. I've already started writing the story for the second one. 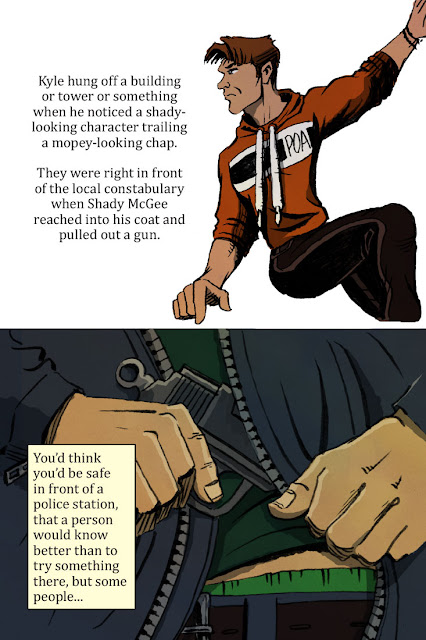 If at first you don't succeed... 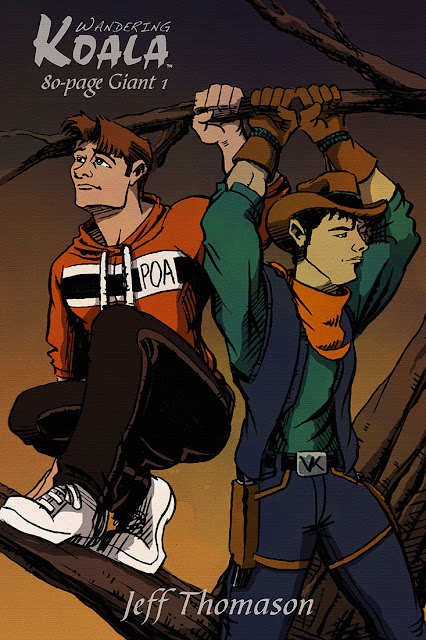 So I had originally created a different cover for my latest graphic novel, and while it was good, it just didn't speak to me or feel like the story. But I didn't know what else to do, so I published it.

Then while working on the Adult Coloring Book version of the story (yes, there will be a Wandering Koala Adult Coloring Book for you to color all by your lonesome very soon), I decided to do something else for the cover so it looked like its own animal. I ended up liking this cover so much, that I decided to change the color eBook version as well. I'm much happier with how it turned out.

This was inked with a Prismacolor brush-tipped pen and colored in Adobe Photoshop.

The latest adventure of the Wandering Koala is now available as an Amazon exclusive.
No comments: 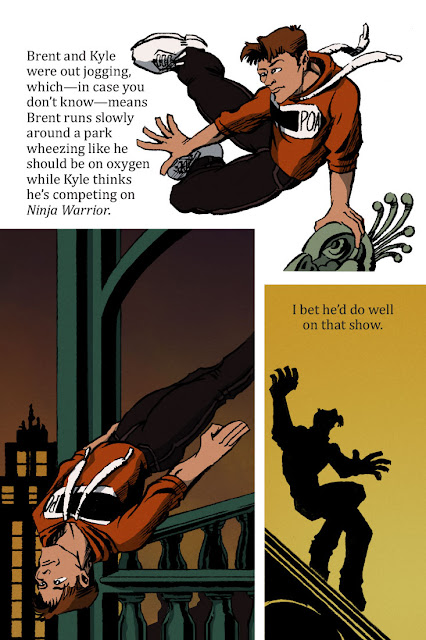 Brent and Kyle were out jogging, which--in case you didn't know--means Brent runs slowly around a park wheezing like he should be on oxygen while Kyle things he's competing on Ninja Warrior.

I bet he'd do well on that show. 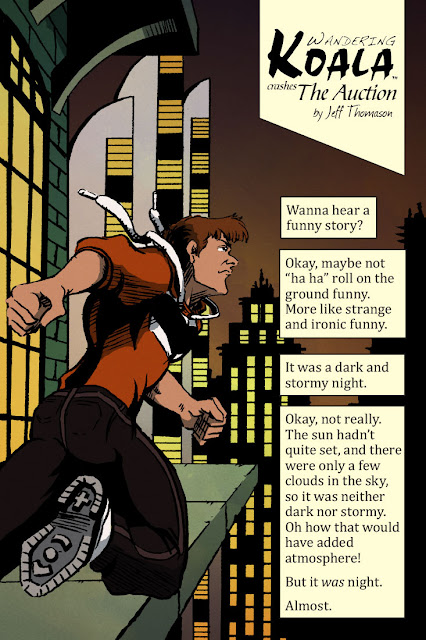 It was a dark and stormy night.

Okay, not really. The sun hadn't quite set, and there were only a few clouds in the sky, so it was neither dark nor stormy. Oh how that would have added atmosphere. But it was night. Almost.

The latest adventure of the Wandering Koala is now available as an Amazon exclusive. 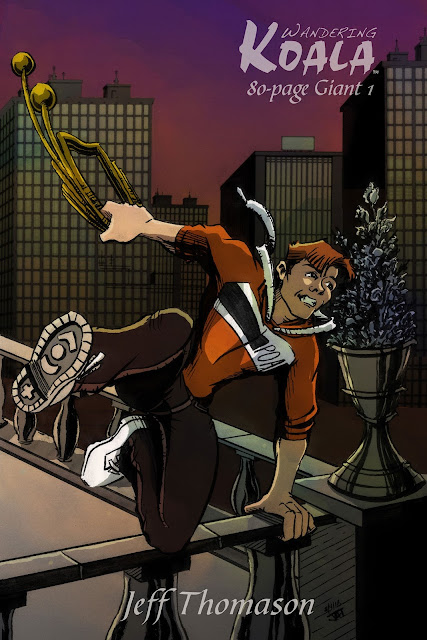