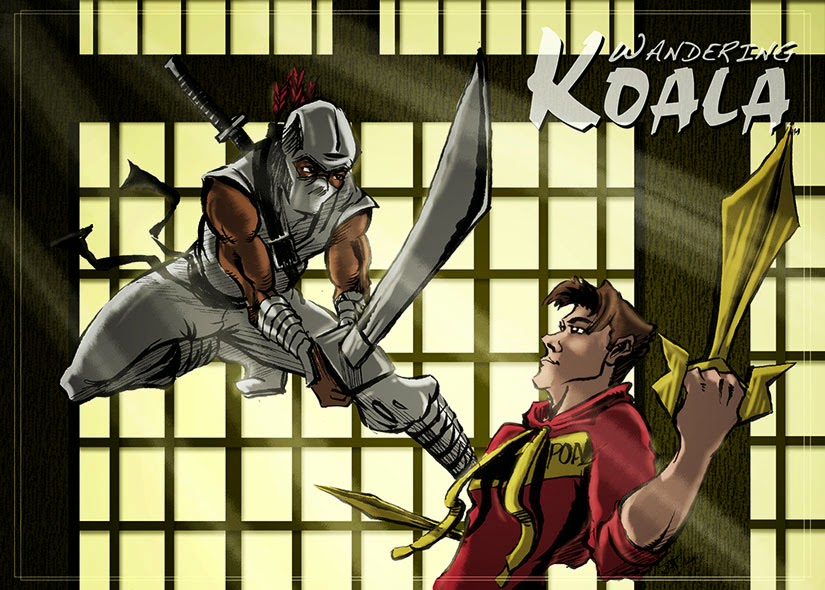 The 80s had the best toys and the best cartoons. And more often than not, the two were connected. A few meddling people saw these cartoons as nothing more than 30-minute commercials. As a youngster I asked myself what we wrong with that? I still don't see the problem. Ironically many of those same people champion and applaud certain shows that are nothing more than 30-minute or 60-minute commercials for their political and subversive propagandas, but that's a subject for another post.

One of my favorites was G.I. Joe. I've never been a fan of military anything (unless it's World War I) so it's funny I liked G.I. Joe so much. Rewatching those shows now as an adult, I realize they weren't military at all but science fiction. Cobra always had some outlandish base in an exotic corner of the world and used some science fiction McGuffen to blackmail the world, and G.I. Joe would use their scientifically advanced vehicles and weapons to stop them. This was good science fiction filled with interesting characters and exotic locals. I love shows that travel to exotic locations.

The 80s were also the era of the ninja, and G.I. Joe had their ninja, Storm Shadow. Most of the time he worked for the bad guys, but from time to time his honor would require him to assist G.I. Joe. He was always left mysterious and in the shadows with little exploration of his background, and that just made him cooler. I know a lot of people want a full back story on all characters with "character development" (a term people use without really understanding what it means), but that really limits your story options and turns a tale into a factory churned out yawnfest.

I've been wanting to have Storm Shadow meet the Wandering Koala for a while and finally got around to it. The figures were drawn with a Staedlter pencil and then inked with my Japanese Brush Pen. I created the dojo in Adobe Photoshop and colored the characters in Corel Painter.

I'm really happy with how it turned out. What do you think? Leave me a comment and let me know. 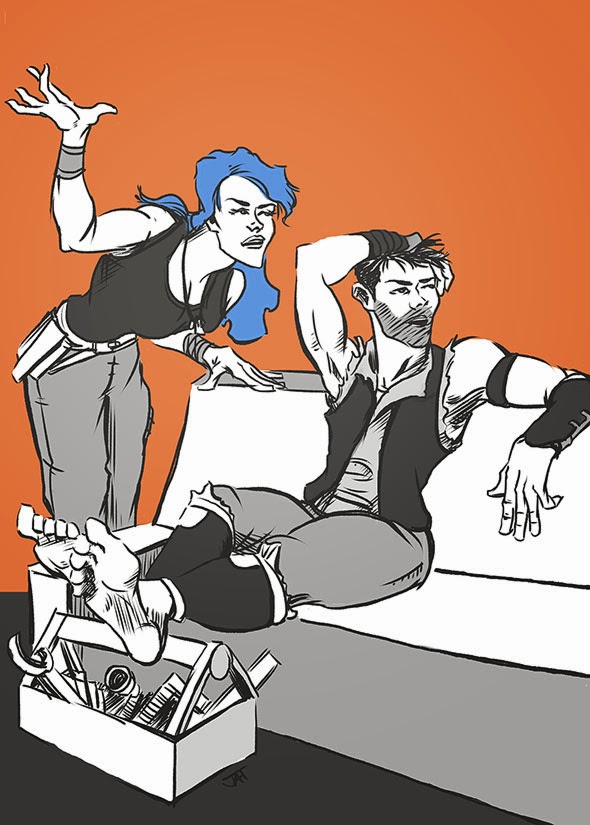 I love trying out new software. I recently purchased Manga Studio 5 and have been wanting to try it out. I've also been wanting to do a little more Jak Phoenix art, and so...

I'm impressed with quite a few features of Manga Studio. First, it has a lot of great tools from pencils (light, dark, rough, and more) to pens (slick to textured) to watercolors (and gauche like paints) to oil paints to pastels (including chalk like strokes). It has an amazing set of rulers from straight lines to curved lines to perspective lines. It masks. It has lettering and easy balloon creation. It has layers and adjustments one is used to in Adobe Photoshop. But it isn't feature overloaded which means one can sit down and start using it pretty quickly. It's kind of like a stripped down version of Corel Painter providing the tools you really need and will use but with the familiarity of Photoshop. And the price at under $50 at Amazon is hard to beat for all this power. Just look at the line work above. That was with a default brush, no adjustments needed.

I still have a lot more experimenting to do with all the powerful features (like 3D models for reference) but so far I'm very happy with the program.

Usually I use a more naturalistic color scheme for my fan work of Jak Phoenix, but I was curious how his universe would look in my Wandering Koala Stark style. It looks pretty good. What do you think?
No comments: 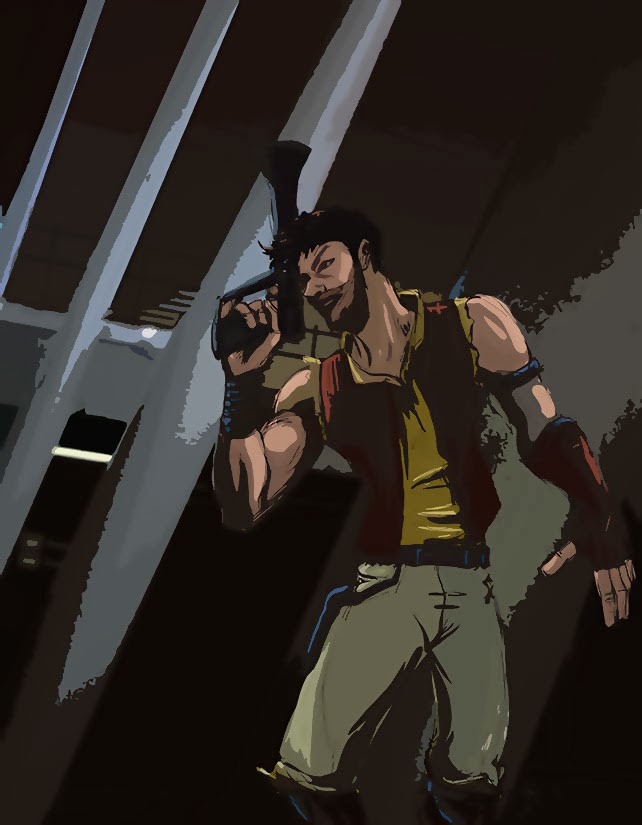 So I've wanted to get into digital painting for awhile. I've tried several times with several programs, but have yet to find a satisfying technique. Maybe I just wasn't meant to paint.

Today I tried to do a digital painting of Jak Phoenix, the star of two really fun and entertaining novels. And he's a blast to create fan work with. I created a painting completely in Corel Painter. I wasn't satisfied. So I brought the painting into Photoshop to see what I could do with it.

Needless to say after a few filters and a little simplification later and I was MUCH more satisfied. It worked because the structure was good, the design was strong, and the colors and values were almost working. I'm always amazed at how it only takes a few modifications to make a work go from almost working to working beautifully.

Here is the original. It's not bad, but it's not really good either. The background is from a public domain photo by Lynn Greyling. 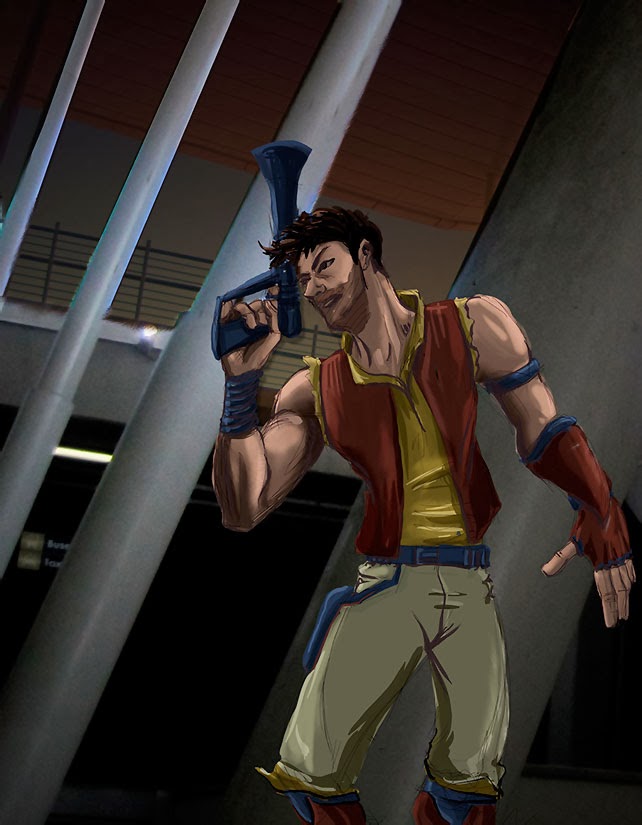 But don't take my word for it. What do you think?
No comments: 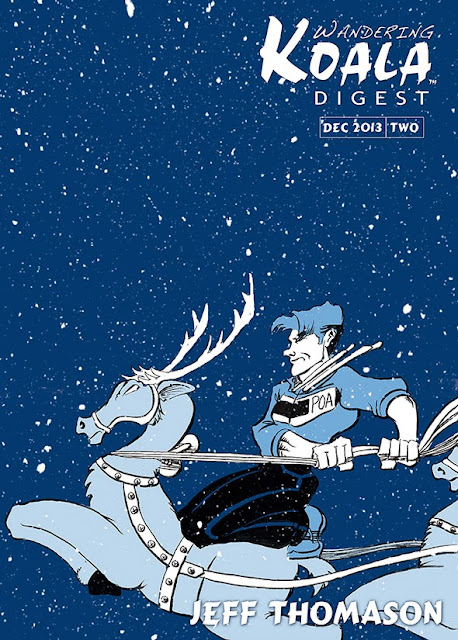 One thing that makes the Marvel Universe so much fun is how easily and how often characters in one book will crossover into another. In the DC Universe that's always been a lot more rare. Probably why I enjoyed (and still do) SuperFriends so much.

But while I love to see Superman meet Batman and Wonder Woman and Spider-man team up with DareDevil and Captain America, I'm not sure I'm a big fan of Superman meeting Spider-man. I love both characters, but for different reasons. They each have a different tone and feel that just don't mesh well with each other. And I don't mean just because one is heroic and the other is tortured, but there is a different feel to the Marvel Universe as opposed to the DC Universe. Their universes are just so different, that they don't make sense to me together. Am I alone in this? Even when the same writer and artist team work on the different characters, the work is so different. Take a look at Jeph Loeb and Tim Sale's Batman: The Long Halloween and compare it to their Spider-man: Blue or Hulk: Grey--they have totally different vibes.

But there are some characters and universes that make sense to meet. Teenage Mutant Ninja Turtles have had a lot of crossovers, and those have made sense. Hellboy has shown up with characters from other companies (including Batman) and it worked. So I guess I'm not against crossovers per se, but I want the crossover to make sense. I want the characters to mesh.

So does Wandering Koala meeting Wonder Woman make sense? I think so, and not just because I created Wandering Koala. I think they work, because Wandering Koala is a pulp-style hero, and pulp heroes seem to have the most flexibility because of the visceral place they come from. Pulp art and pulp fiction is as basic to humanity and human emotion as one can get, and for that reason it makes sense with other characters. Look at Tarzan--he crosses over with everyone in one form or another (KaZar in the Marvel Universe for example) and he works. Hellboy is pulp and works. Spawn in some forms is almost pulp and he made sense crossing over with Batman. The new Arrow series on the CW is a pulp interpretation of Green Arrow, and it works better than any other version of the character.

What do you think of crossovers? Do you enjoy them? Have any ever bothered you?
No comments:

Have you ever worked on a project and thought it would never be finished?

That's how I've felt working on the second issue of Wandering Koala Digest, which is funny, because I'm actually on schedule. I guess it's because the page count for the graphic novel portion grew to 35 pages instead of the usual 32. Oh, well, the story needed the extra pages.

I'm so excited it's finished that I decided to share the final page as a teaser. 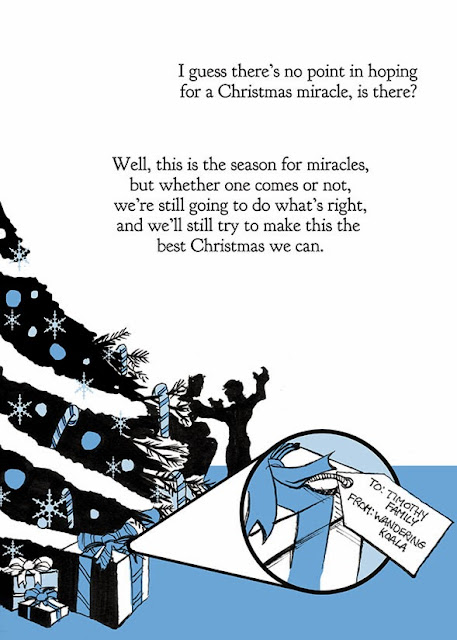 What do you think? Be sure to leave a comment and let me know.

Wandering Koala Digest will be available for pre-order in a couple of weeks from Barnes & Noble, Apple, and Kobo, and will go on sale mid-December.
No comments:

Ender's Game is one of my favorite books of all time. I have been wanting to see a movie adaption of it for years, but I've been scared of seeing a movie adaption because books don't always translate well to film.

This time they did a pretty good job. They were true to the book, showed all the essential elements, and cast the characters well for the most part. (Anderson -- bad choice.) The themes and messages came thru. The few places it deviated from the book fit the later books and the author's state of mind now. It wasn't a full two hours, so they could have spent more time in Battle School developing relationships and showing how brilliant Ender really was.

I did miss all the parts that were cut, but I understand it just wouldn't have fit in a single movie. Maybe one day they'll turn it into a TV mini-series and film the entire book.

I'm just curious where they'd go with a sequel. There are literally 3 different groups of "sequels" -- the original Ender's Trilogy (which has four books for some reason), Ender's Shadow Quadology (even though there are five books), and then Ender in Exile.

And in completely unrelated news, below is a teaser from the next Wandering Koala story due in December. Being the beginning of a month, I thought I'd give you a little morsel to whet your appetite. 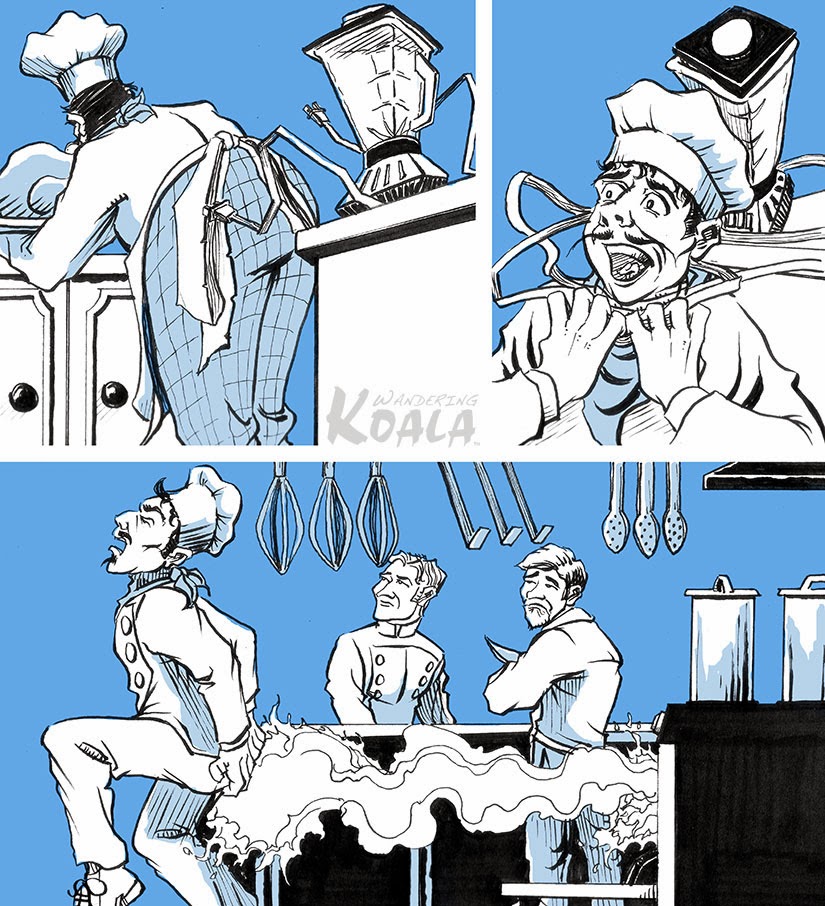