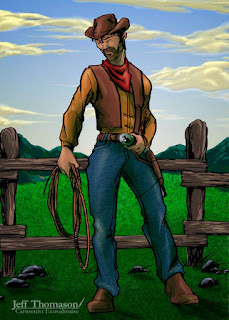 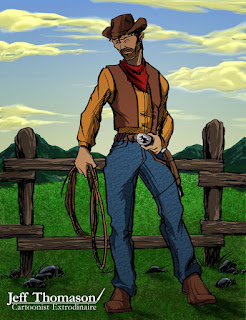 So I'm back to character sketches and character designs. This time I turn to the West for a cowboy.
I drew this in Corel Painter X. I'm really starting to enjoy the look of digital inks. As I mentioned in a previous post, digital art should look like digital art and not traditional, and this is another step towards creating a unique look for my work.
I created two versions to test coloring styles. For the first I used my typical painting style in Painter from the half page comic days. For the second I used a new style with Photoshop shadows. I thought the second version would looks better, but I think I like the first.

I think the background turned out exceptionally well. The figure I'm not as happy with. It's good, but not great. He feels a little stiff.

But let me hear what you think.
No comments: 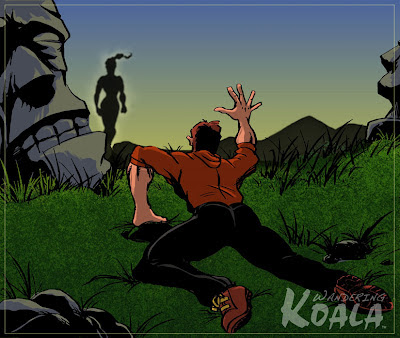 This may surprise a few people, but there was a time before computers existed. No really, there was. Back then artists created work with paint, watercolors, ink, charcoal, and other physical mediums, not Photoshop or Wacom tablets. Once computers were invented, it didn't take long for computer graphics to rear their pretty heads. At first they were pretty primitive and had a distinct look. (Check out The Last Starfighter to see what I'm talking about.) By the 90s, computers were powerful enough to create work that looked like it had been made by hand. That lead many to ask whether computers were merely a new tool to create work that looked like traditional art, or whether computers were a new medium with it's own look and characteristics.
They were both right.
Many people use computers to mimic traditional art methods. But not me. I've said many times that a watercolor should look like a watercolor, and an oil painting should look like an oil painting. While you can create photorealistic oil paintings or rich watercolors that look like oil, one has to ask why. Each medium has really cool and unique properties, and the artist should take advantage of them. And that doesn't apply strictly to visual art either. Movie adaptions of books should take advantage of cinema and not try to follow a book to closely, as should book adaptions of movies.
I've been working with a number of computer programs including Adobe Photoshop, Corel Painter (which does an amazing job of emulating natural media), Google Sketch Up, and others. I've been trying to create a style that looks digital, but not cheesy-we're-still-stuck-in-the-90s digital. The drawing above is my latest attempt. It has all the hallmarks of a traditionally drawn and painted work, but there's no question it's digital. I'm happy with how it turned out. I think an illustrated eBook with this type of art would be pretty cool, especially on a tablet. Maybe for my next project...
No comments:

The next phase of painting 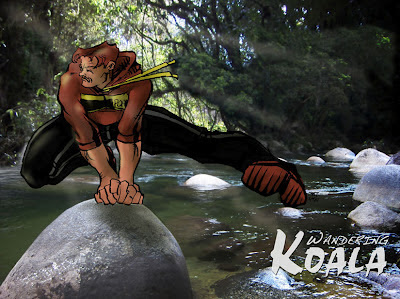 Man has been creating art for as long as he's existed--at least as far as we know. He's used every medium, tool, and device he could get his hands on. In the ancient world, painting on walls was very popular. Unfortunately, most of those walls have fallen and taken the paintings with them. In the middle ages artists used more portable canvases such as wood panels and stretched canvas. More of these exist today but not in their original locations. For those works specifically designed for a space, something is missing.
In the 21st century we have the same tools as previous artists--oils, watercolors, graphite, charcoal, pastel--and we have a few additional tools: pixels and electrons.
The illustration above is my latest attempt at digital painting. I tried making it look like a traditionally painted painting, but that just isn't me. And in today's world, very little traditional painting and illustration is used. Just look at a a movie poster, book cover, magazine graphic, or even newspaper. All of these used to be filled will hand drawn and painted illustrations. But today they use photography and computer generated works. It's the current trend. The good side is it is much quicker and cheaper to create media. The bad side is legions of artists are graduating from art school with little opportunity to use their skills to earn an honest living. What does this mean for the art? Good question.
While you ponder it, enjoy my latest work, and be sure to comment and let me know what you thing.
No comments: