Evolution of a Cover 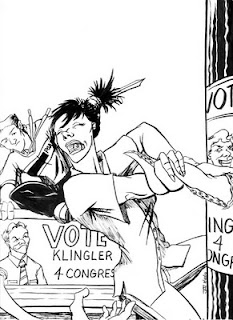 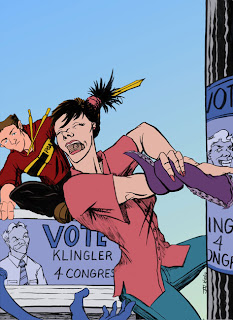 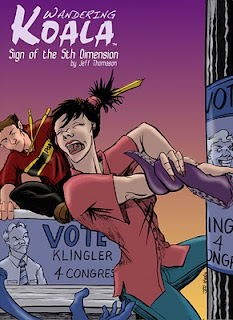 If you've been reading my blog, then you know I've just published a new short story called Sign of the 5th Dimension. (Take a peek below at the description.) I had a cover for it when I published it, but I wasn't happy with it. Unfortunately I was in the middle of illustrating a children's storybook, so I didn't really have the time or energy for my own stuff. But now I'm almost done with the book, and I have time for a few projects of my own, so I decided to redo the cover.

I thought it would be fun to show the steps and stages my illustrations go thru. First I sit and ponder the image until something comes to me. Then I create a quick thumbnail in my tablet with a pen (it looks like scribbles to anyone else). Second, I pencil the image. Then I ink it (see the first image). After it dries and I've erased the pencil lines, I scan it into my iMac. I color it in Corel Painter X with flat colors to get them right (see the second image). Finally I do cool painterly effects and have a finished image (see the third image). You'll notice the sky changed color. I was placing the text on the image when I said to myself, "Self, this isn't dramatic or science fictiony enough; no one is going to buy your short story." So I made the sky a purple to orange gradient and wallah!

What do you think? Do you like it better than the original?
No comments: 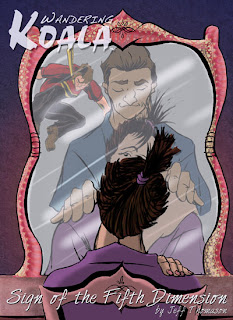 I love science. I always have. I guess that's why I write science fiction and include a bit of real science in each story.

The cover to the left is my latest short story. It was inspired by a Japanese Anime called Paprika. During the opening credits you see her move through posters, crosswalks, signs, etc. seamlessly, and I thought that would work well in a series of ghost stories I was writing (which later became Wandering Koala tales). It took my a while to come up with a story to put with that image, and one night a twisted romance came to mind, so that's what I used at the plot vehicle.

This isn't my favorite story, but I do like the science in it. Currently, scientists seem to be excited about string theory and 10 dimensions. There was even an article about "proof" of a multi-universe in National Geographic. Personally, I think its more spontaneous generation and sun revolving around the earth type science. I think the ideas of a fifth dimension from a century ago are more correct, and I think scientists in the next hundred years will realize that. Maybe the Large Hadron Collider at CERN will lead to it. Maybe another Einstein will pop up and figure out the Unified Field Theory with it. Or maybe some brilliant, young science fiction writer will point the "professionals" in the right direction. We'll see.

Sign of the 5th Dimension is on sale at Smashwords, Amazon.com, and soon at Barnes & Nobel, Sony eReader store, Apple iBooks, Kobo (formerly Shortcovers), and Diesel, in mulitple ebook formats.

So it's been awhile since I last posted. What have I been up to? you are probably asking yourself. I've been commissioned to illustrate a children's book for a guy in Texas. He liked my "Robots" (it's one of my favorites too), and he wanted his book illustrated in that style which I was only too glad to do. I've passed the thirdway mark and am moving towards the halfway point.

This is a two-page spread from it. I used a Pigma Brush and Painter X (plus a Stanford Pencil and a Sakura eraser). I'm really pleased with how the book is turning out. It's definitely some of my best work. What do you think?
No comments: