I'm currently working on a new graphic novel I hope to release in October. I'm a little over halfway finished drawing, inking, and lettering it. While working on it, I try to make each panel as interesting as possible and say as much with as little as possible. One great way to do this is thru silhouettes. 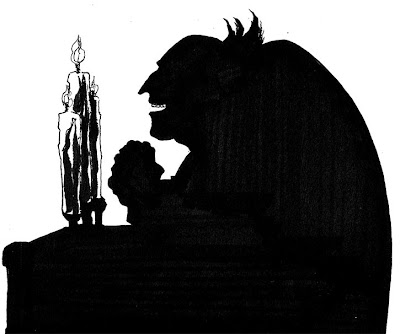 There is a principle of design called "Less is More". The idea is the average person tries to put too much into a work, and by stripping it down to its essential parts, one strips away the competing elements so only those that convey the message are left. The result is a clearer, stronger message without static or noise. In principle this is a good idea, but like anything else, it can be taken too far. (I'm talking to you Jon Ives and your recent iOS redesign and a few other things you've stripped too far down.)

Silhouettes are one common and powerful result of this principle. As with the example above, there is basically a large black shape with a few lines for the candles (ok, I did cheat by adding lines for the candles, but it made the panel so much more atmospheric). Even without seeing most of the details, it's clear who the proprietor is and the sense of the macabre and creepy comes thru clearly. In fact, blacking out his features may be even creepier.

Another form of this principle is chiaroscuro, or lights and darks. This was quite popular with painters in Rembrandt's day. The idea is to push the darks extra dark and the lights extra light so the image almost appears to be black and white shapes but with a few important details. Flemish painters tended to use color, but I like the modern uses in film noir and Frank Miller Sin City comics that use strictly black and white shapes with a few lines. I, of course, had to use a little chiaroscuro in my graphic novel as well. 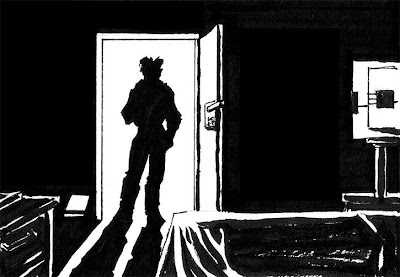 Another advantage of minimalism is it adds to the stylization of the work. Stylization is nice, because it adds interest and uniqueness. I used to think only photorealistic renderings were good, but now I realize that the further one abstracts or stylizes a work from the way it appears in ordinary sunlight, the better (again to a point because any virtue taken too far is a vice).

You probably noticed the title says penultimate, which means one away from the ultimate. So what is the ultimate in minimalism? That's a revelation for another day.
No comments: