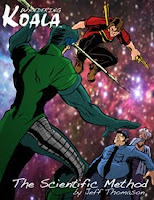 A few years ago I began developing Wandering Koala as an ongoing series, then a mini-series. After I finished the first issue, I sent it to a couple of publishers who never got back to me. I had just bought myself a Kindle at the time, and I was loving it. I knew there was a way for anyone to publish a book to the Kindle, so I said to myself, "Self, why not publish your comic on the Kindle?" So I did.

My original plan was to publish one issue per month. Well, the first issue did not take off to stellar sales, and while working on the second issue, I realized the story I was telling would work better as a novel, so I turned it into a novel. I was only going to publish it electronically, but it turned out so well, I spent the money to put it into print. After that I started a series of illustrated short stories and a couple of other comic projects.

I didn't really do anything to promote the single issue of Wandering Koala vs. The Scientific Method, and I had even thought of removing it, but it kept selling, and has actually sold better than anything else I've published. So I decided to do a second issue. I wasn't very happy with how my first attempt had been going, so I decided to start from scratch. I did reuse a few panels from my first attempt, but with some serious rearrangement. I also decided to use a digest comic format, because I loved my old Richie Rich and Archie Digests I use to buy in the early 90s.

This is the first comic that I've created that actually looked like what I thought my comic would. I was so happy with the results. Of course I recognize there is room for improvement, but so many of the questions and struggles I've been having have been worked out. I can't wait to start on the next two issue story, after I finish a couple of short stories I'm nearly finished with.

The wonderful thing about publishing with Amazon Kindle is the publication is available on the Kindle, the PC, the Mac, the iPhone, the big iPhone (aka the iPad), and the iPod Touch. Android is coming soon!

You can check out a few sample pages at http://www.wanderingkoala.com/comic0001.php.

You can purchase a copy of the comic for yourself at http://www.amazon.com/Wandering-Koala-Scientific-Method-ebook/dp/B003S3S2TC/ 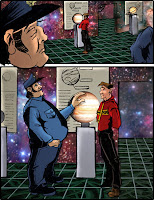 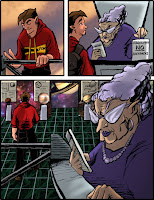 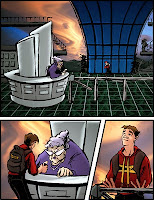 I like to mix photographs in with my cartoons. I have a huge library from various trips, and there are a lot of public domain images available online. I usually do some digital altering of them so they mesh well with my drawings. For example, on these three comic book pages, I used photos of the sky and space as wall paper and blurred them so they looked like prints on canvas. I think the effect was very nice, and it adds a lot of character to the images. What do you think?

These are three fully colored pages from the second issue of Wandering Koala vs. The Scientific Method. I should be finished with it in a week or so, and then I'll publish it. This is the first comic book I've done that I've really felt looked like I wanted it to; that looked like a comic book by me. I may even do more if this one sells well.
No comments: