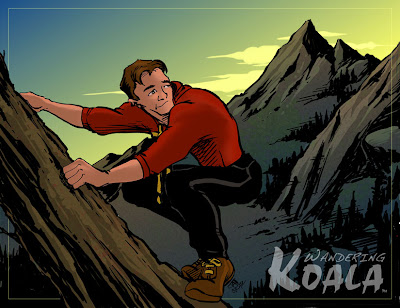 Style is an interesting thing. It's something unique to each person. Some style has style while others don't. It's something that is developed, yet it almost happens subconsciously--someone can't sit down and say, "I'm going to create a style and it'll be like this."

So how does one go about developing a style? It's a time consuming process, and some would argue one that never has an ending. But there are a couple of things one can do to speed up the process. And they all involve a sketchbook.

First, every time you see something that inspires you or catches your eye, emulate it in your sketchbook. Emulate--don't slavishly copy. Create something original using the aspects that caught your eye.

You'll still spend a great deal of time developing your style, but these exercises will focus your effort and speed up the process.

So what does this have to do with the above image? I've been working towards a certain type of style, and with this illustration, I think I've reached it. 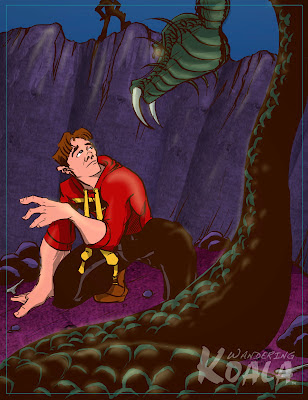 I've always thought that art materials should be true to themselves. What I mean is a watercolor should look like a watercolor, and an oil painting should look like an oil painting. Just because you can make watercolors look like oils doesn't mean you should. Each material has unique properties that allow you to do things you can't in other mediums as well as certain restrictions you have to work around. It's part of what gives artwork its charm.
But that brings up a bit of a problem when it comes to digital art. The computer has a unique look to its graphics, but it can also do an amazing job of emulating traditional art (thanks to Corel Painter!). So should the same rules apply to digital art as traditional art?
On the one side I'm inclined to say yes. The computer has introduced a whole set of new "looks" that hadn't been done before. But then I look at these (like vector illustrations and flash animation) and I'm taken back aghast at how ugly they can be. Too sterile, too mechanical, too generic.
So that flips me to the other side where I see the computer can emulate the natural media without the messy cleanup or the expensive art supply bill (of course, it's not like computers and graphic software are cheap, so that's probably a wash).
This has led me to experiment a lot with style. I tend to not like my work that is too "computery" so I've been trying to get a look that is closer and closer to natural media. But there's no reason I can't throw in a few digital flairs here and there. And maybe that is the answer. Maybe a mostly traditional route with digital flourishes is the unique look.
Take a look at my latest sketch and let me know.
No comments:

Science is a Fickle Mistress

Without science, there wouldn’t be science fiction. It’s an essential ingredient. Some stories—like hard science fiction—center around a scientific principle, theory, or discovery. Others—like space opera—rely on the results of science, but don’t delve too deeply into specifics.

What's great about science, at least for scifi fans, is it is always changing. Anyone who’s studied the history of scientific thought will see that science changes its mind more often then a lady about what to wear on a date. Here are just a few recent examples:

The ancient Greeks believed the Earth was the center of the universe and everything else revolved around it. They believed the sun, moon, planets (or moving stars), and stars were on spheres, one for each body in the sky, and constructed an elaborate system to explain their movements. But as more objects were discovered and their movements more carefully mapped, the spheres couldn’t keep up.
Then in the early-16th century a German named Copernicus postulated the theory the Earth revolved around the sun others had proposed the theory earlier, but Copernicus had math to back him up). Others followed him and were promptly punished for their heresy. Eventually the idea became generally accepted.
Then science changed its mind again and said the Earth doesn’t revolve around the sun, but around its center of gravity. But don’t expect that to be the final word on the matter.

Issac Newton was a smart guy who began the modern movement of science. He is credited with many discoveries such as the Law of Gravity, Laws of Motion, and many others. Many believed he had “gotten it right”.
And then this obscure clerk in Germany named Albert Einstein proposed a couple of theories, one relative and the other special, that took center stage and led to quantum physics. Newtonian physics just couldn’t describe the microworld. When GPS satellites were launched into space, Newtonian physics couldn’t cut it but Einstein’s equations made the system work.
In the 1970s, a new theory called String Theory came into favor to explain the very fabric of existence. Then several different flavors popped up such as M-Theory and Superstring theory. Then they fell out of favor. Then they fell back into favor. And the story is far from over.
And don’t get me started on the Unified Field Theory…

Just a decade ago the egg was considered to be one of the worst things a human being could eat with its high cholesterol. Then a few years ago a new study came out that said eggs were good for you and should be included in a healthy diet. So, did the egg’s effect on the human body change? No, scientists just changed their minds on it.
Sugar, artificial sweeteners, and corn syrup have an equally jaded past. At one time anything with sugar in it was considered the devil and many foods moved to artificial sweeteners. Then people realized sugar was natural and easier for the body to digest than artificial sweeteners. Soon after high fructose corn syrup was seen as the anti-Christ and removed from food to be replaced with all-natural sugar (or dehydrate cane juice if your marketing team was especially clever). Just like eggs, sugar and its effect on the human body haven’t changed, but that doesn’t stop scientists’ minds from changing.

Dinosaurs are one of the most rapidly changing theories in science. A century ago they were dumb beasts sluggishly dragging themselves across the landscape. Soon researches decided they were intelligent and quick lifting their tails as they ran. Current theories speculate they weren’t lizards at all but giant birds. And then there’s that asteroid that got people laughed at in the 1970s for proposing it was the cause of the dinosaurs’ demise but is now the most widely accepted theory.

All this changing is bad if you’ve accepted science your religion and believe “that’s the way it is. Period.” New discoveries are an anathema to that group, because they change previous views. What science believed yesterday isn't what they believe today, and tomorrow they'll be on to some other theory.
And for scifi readers and writers it’s wonderful, because it means we’ll never run out of things to write about. Every new discovery or theory can be turned into a dozen new stories. And who doesn’t love a great new story?
No comments: