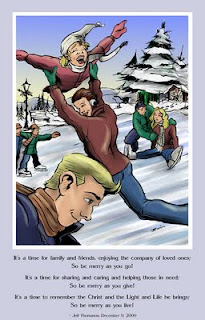 Every year I make a Christmas card and send it to friends, family, and co-workers. I always create an original illustration and an original poem. I usually pic a Christmas Carol as the them.

This year I was listening to David Archuleta's version of Pat-a-Pan and really liked the "So be merry as you play" line. I used that as the theme.

I drew the card with a Stadler Pencil, inked it with my croquil pen and sumi ink, then colored it in Painter X. I was really happy with the results.

Something I find interesting is how few people say thank you for a Christmas card. I emailed out over four dozen cards and only heard back from 7 people. Is it because I emailed the card people don't value it and don't feel the need to say thank you, or has the world just lost their manners. Or maybe people just didn't like the card and don't want to say anything about it. They all make sense.
No comments: 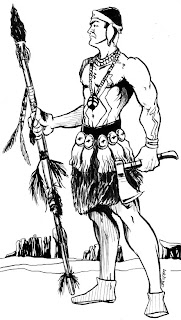 So a friend of mine asked me to create an illustration of him as a Navajo Warrior (he is Navajo so it's fitting). And this is the result. I was really happy with how it turned out.

The figure itself is done with a croquil pen & ink. The background was added digitally. I'm planning to digitally paint it, so be looking for that.
No comments: 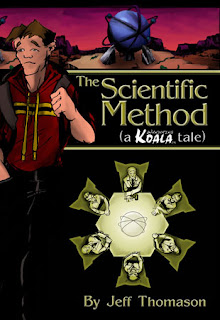 This summer I published my first novel, The Scientific Method (a Wandering Koala tale). It is currently available in Paperback from Amazon.com, and electronically for the Kindle, Barnes & Noble eReader, and soon will be available for the Sony eReader.

It's a science fiction novel written at a Jr. High level, because that's when I loved reading the most. The Wandering Koala is this mysterious traveler that wanders from city to city helping those in need. When he was young, a terrible tragedy left him mute, but that hasn't stopped him from speaking up for what's right.

In this particular adventure, an amateur scientist has made the greatest scientific discovery ever, and the scientific community is embarrassed and threatened that it will cost them all their prestige and their jobs, so they come together to suppress the knowledge. Science isn't immune to the corruption of greed or politics after all.

If you are looking for a great book, I highly recommend you pick this one up.
No comments:

I've always loved 2-D Animation, and I've always wanted to produce my own, but the equipment and materials were way too expensive for an enthusiast to get into before the digital age. Then Apple released iMovie, and I was able to create my first animation. It turned out pretty cool, but it was a lot of work, took a lot of time, and there was so little movement.

I knew how I wanted to animate; I just needed a program that would let me. I found several that came close, but not close enough.

Then I found Anime Studio Pro. It did almost everything I wanted it to, so I bought it a year ago, but didn't have time to do much with it. Then I was asked to create an animated intro for an ice sculptress in California. This was the perfect chance to try out my new software.

It took longer than I thought, and the program had a few quirks I had to get use to, but overall it performed admirably. The render was beautiful. The special effects worked well. I used Norkross Movie maker to add the sound and sound effects and wallah!

I was very pleased with the final results. I hope you are too.
No comments: 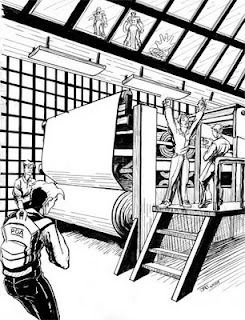 So when it came time to write my own book, that's the format I went with. Here is an illustration from that book done in the same style as the Hardy boys, The Adventures of Superman, and The Shadow.
No comments:

The day Amazon announced their new Kindle, the Kindle 2, I pre-ordered mine. It is a wonderful device! It is so easy to read. It is so easy to preview and buy books via the cellular phone network. It is so easy to load your own books onto that you can download free from the Internet. And the battery life is really good. I didn't know how it could get any better.

Then, just before my Kindle arrived, Amazon released a free Kindle application for the iPhone that lets you read your books you've already purchased from the Kindle store AND sync your reading progress with your Kindle. Plus, you can view the books in color. How could it get any better?

Then I discovered how easy it was to self publish your own book. So I decided to publish my own. I created a comic book and have been trying to get it published. So I said to myself, "Self, why not publish your comic book via the Kindle Store." Well, being as disposed to taking a wise man's advice as I am, I decided to do just that. You can see the cover, and issue one is currently on sale. Anyone with a Kindle, iPhone, or iPod Touch can purchase and enjoy it. Just search for Wandering Koala on Amazon.com.
No comments: 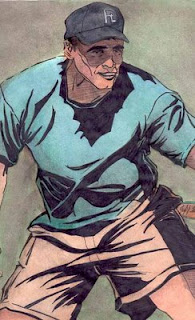 I discovered watercolor pencils sometime in high school. I started using them exclusively along with a crowquill pen and Koor-I-Nor ink.

What I love about them is how versatile they are and how beautiful the color is. Being in a pencil form, you Koor can use them like a colored pencil, then brush a little water over them for some cool effects. Or you can scribble on a separate piece of paper mixing the colors you want in the proportions you want them, then use a brush to color with them like watercolors. Being watercolors, they are translucent and capture light beautifully, reflecting absolutely gorgeous colors. If you spray fix them, then they brighten (and some colors darken) like pastels for even more effects.

My favorite brand of watercolor pencils is Crayola (and they are by far the cheapest). Crayola offers an 8-pack with a brush, or a twelve pack with no brush. The boxes open up like Prismacolor boxes with a slit in the middle so you can set them up at an angle at your desk. My second favorite are Design (now discontinued). Prismacolor comes in third. I've tried other brands, but they've been very disappointing. My favorite paper to use them on is bristol board, though sketch books work amazingly well. Sometimes I use waterproof ink, and sometimes I use water-soluble ink to give my drawings darker shadows. Again, watercolor pencils are so versatile, you can use them with anything!

This drawing is one of a series of three I did in college. I inked the drawing with a Pilot Precise V7. I was still trying to figure out my style and how I wanted to make lines. This series turned out really well, and I'm still proud of them today.
No comments:

Music makes the people come together 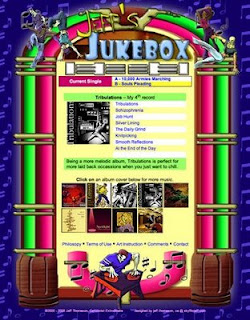 I love music. I love listening to it, and I love writing it.

A few years ago, Apple released a new program called GarageBand. When I saw the presentation during one of Steve Job's Keynote Addresses, I couldn't contain myself. It looked like the coolest program ever. My brother and I got it as soon as it was released, and we were both blown away by it. It lets you plug in a keyboard or guitar, or microphone, and record your own music, or put together an original composition using royalty-free tracks included with the program. And you could purchase more. We did. We both went nuts writing music. I actually created albums and released singles on MacBand.com.

You can visit my jukebox and take a listen at Jeff's Jukebox. I have a lot of fun writing the music. I'm not good enough to do it professionally, but Apple and their great iLife tools have made it possible to do it for fun at a really high level. GarageBand is still one of my favorite programs.
No comments: