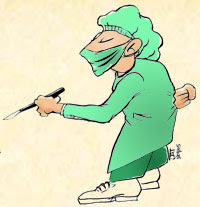 I love DVDs. While I love the main feature (the movie), my favorite part is the behind-the-scenes feature. I love learning how and why a movie was made. The same goes for books. I love learning about the process that went on from conception to publication and all the steps and changes that happened along. So in that spirit, I thought I’d share my own writing process for those who are curious about where my stories come from.

I don’t sit down and say to myself, “Self, you must come up with an idea for a story.” Instead I go about my day working on websites and other work. During the normal course of a day, something will spark, and I write that spark down. I have over a dozen pages of story ideas. I look over these ideas from time to time and explore them in my mind. I’ll write down additional ideas, images, actions, themes, characters, possible titles, etc. that I think of with these, devoting a page to each major idea.

Once I've filled a page with enough raw material, I'll identify the most interesting threads and organize the other ideas around it. I'll create a loose plot so I have some notion of where the story may begin, where it may travel, and where it may end.

Once a story emerges, I’ll write a very tight plot and dialogue. The format is similar to a movie script with the major actions spelled out, a lot of the dialogue written, and the major emotions or thoughts identified. This plot usually ends up getting restarted, rewritten, and resorted several times before it is finished. I think of it as the skeleton of the story. It tells me basically how long the work will be (so I know if it is a short story, a novel, a comic book, etc.) I also know who the characters are, what they will do, what their motivation is, what changes they will go thru, what the major conflicts are, and have a very tight story.

After all this work I’ll begin a handwritten first draft. This stage goes pretty quickly since the story is basically written, the conflicts worked out, and the characters well defined. I still make a lot of changes at this stage, but knowing the overall story in pretty good detail helps me keep everything consistent with revelations and discoveries happening at the right moments.

Once the first draft is written, I begin the second draft which is when I type the story into the computer. Again I make a lot of changes as I go being both writer and editor. I mainly refine the story itself expanding undeveloped scenes and cut boring or unnecessary scenes.

Revision and refinement is mostly to work on the wording and clarify any writing, but I have been known to add a couple of chapters as this stage if the message wasn’t complete. I’ll usually make three passes correcting mistakes and working on wording. I have no interest in impressing readers with my extensive vocabulary or complex sentence structure. I try to make the writing as clear and efficient as possible without getting dry. I want the writing to be so smooth it just disappears leaving the reader with unfettered access to the story.

Finally I illustrate and publish. And wallah — a new story is born!

Email ThisBlogThis!Share to TwitterShare to FacebookShare to Pinterest
Labels: writing