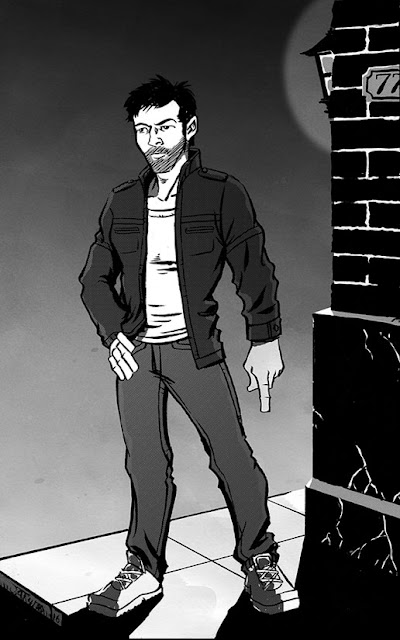 Film Noir is a French term meaning "dark film" and describes a common technic used in the 1940s and 50s for many detective, crime, and mystery films. Visually it involves extreme lights and darks with heavy use of shadows. The type of characters, however, all tend to be grey in the moral relm with none being too righteous, especially the protagonists.

But even that had an antecedent with chiaroscuro painting (italian for "light-dark") from centuries early. And likely this extreme contrast technic existed millennia before, but works don't currently exist so we don't know about it.

In the modern era this style is mostly used in comic books with Frank Miller's Sin City being the most well known example. The contrast provides visual interest to make up for the lack of color. And in more practical terms, the brain tends to process black and white art like it does works making it more effective for storytelling than colored art.

The image above is a Character Design for the René character in my Wandering Koala series. I've made several attempts at the character. I'm not sure this is the final version, but I'm getting close.