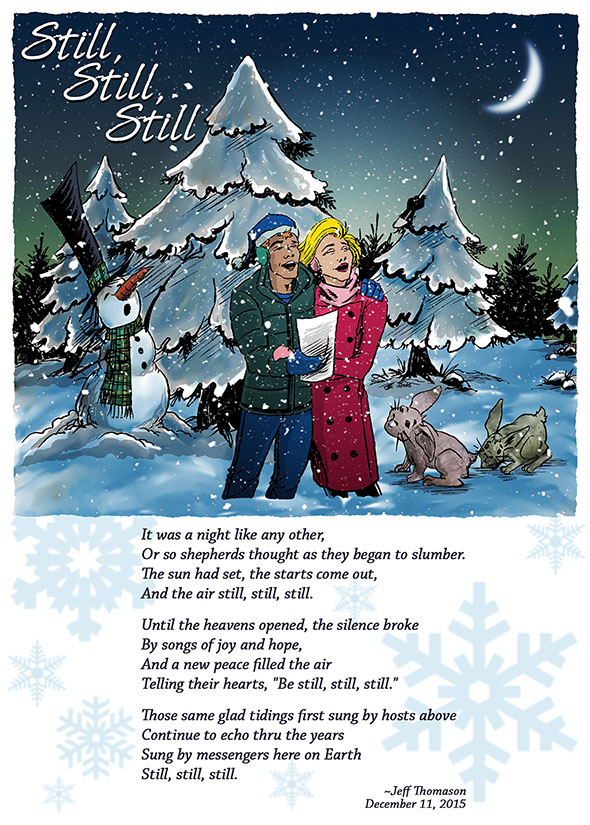 Here is the final Christmas card. Hopefully it will bring a little cheer to your corner of the world. 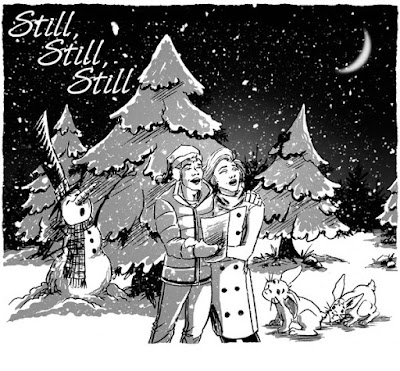 Come back in a few days to see the finished card! 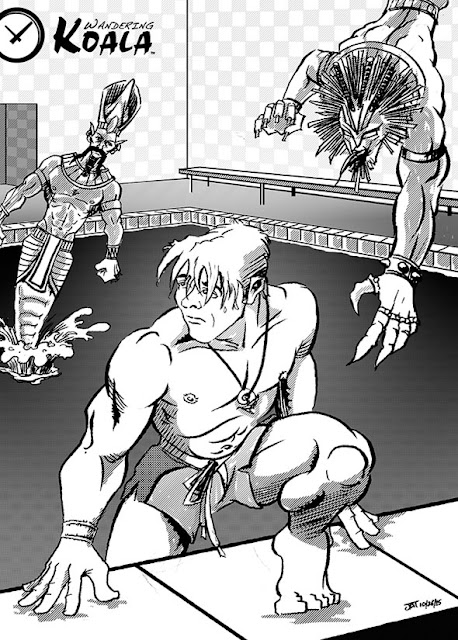 The latest illustration from this year's Halloween series. 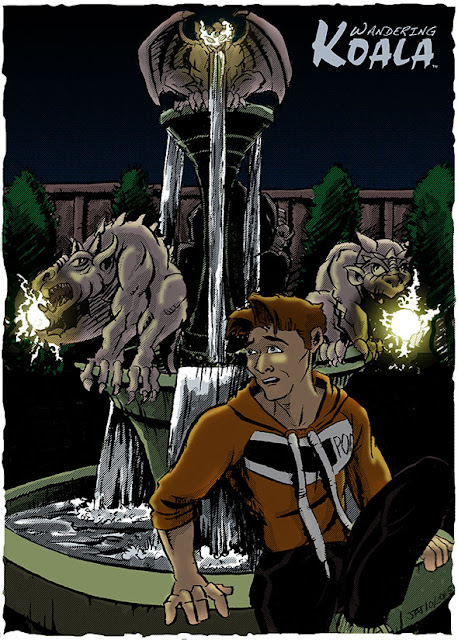 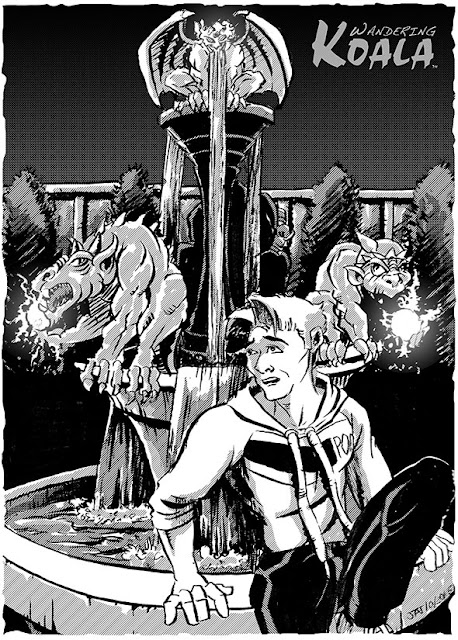 For this year's Halloween series, I've been hand drawing the illustrations and then using Photoshop to create a faux zip-o-tone type effect. I always thought it was cool to see those evenly spaced lines creating shadows and textures on older illustrations. Then I colored this with the limited palette of colors used for silver age and bronze age comics. I did use a Gaussian Blur to soften the light and a satin FX layer for more shadow. It creates an interesting effect.

Halloween 2015: Wandering Koala in the clutches of Witch Hazel 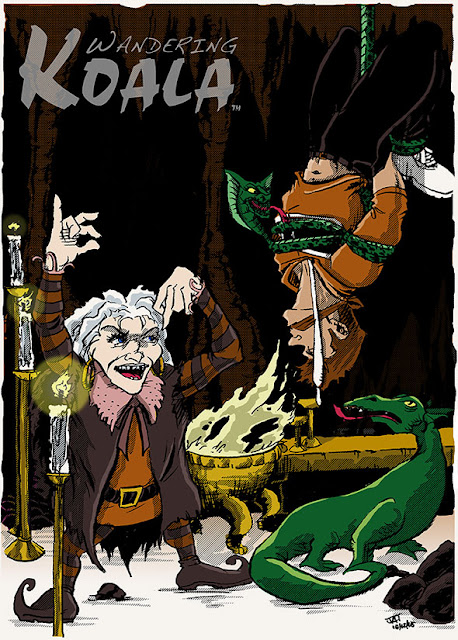 Yesterday I posted the black & white line work of my latest illustration. Today I present it in glorious color.

I've always been a fan of minimalist color schemes. This one is basically orange and green with a bit of yellowish versions of those colors, and yet somehow it appears to be full color. I colored and toned this storybook illustration in Adobe Photoshop CC after drawing it with a Prismacolor Brush Pen, a Tombow Art Brush Pen,  a Japanese Brush Pen from Pentel, and a Sharpie.

I love the shorter stature of the figures, the cutsey look they have, the faux toned shadows, and the minimalist color scheme.

But what do you think?

B&W Illustration - In the Clutches of Witch Hazel 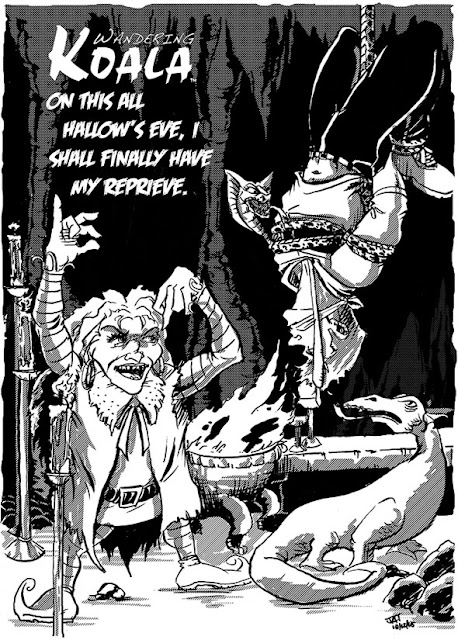 It probably feels like I've disappeared forever, but I haven't. I've just been very busy with design work and haven't had much chance to do much drawing aside from a few sketches.

But it's Halloween, and that means a new series of Wandering Koala illustrations! I love Halloween, and can't let this great holiday pass me by without celebrating it, at least a little.

Here is the first one in a Black & White style I really like. Check back in a couple of days for a colored version.

The Beauty of Black & White Linework 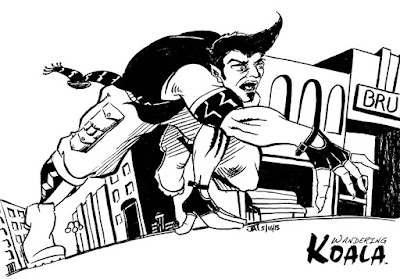 I've always loved black & white linework. There is something just so beautiful and clear about it. I guess that's one reason I've always loved coloring books and independent comic books. When you strip away the color, you're forced to focus more on the design.

The drawing above is a Cuscus, one of the genetic projects created to take down the Wandering Koala. I drew it with a brush pen. I meant to color it, but it looks so nice with just the lines. 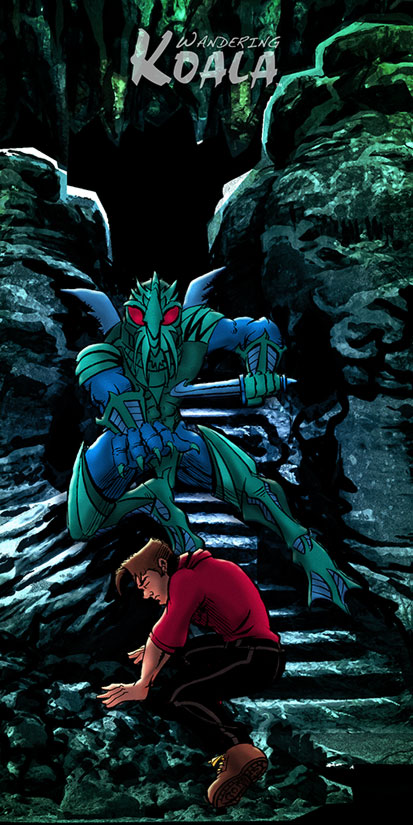 Playing around with techniques and style. I liked this when I first did it, but after a week I don't know if I'm as big a fan. 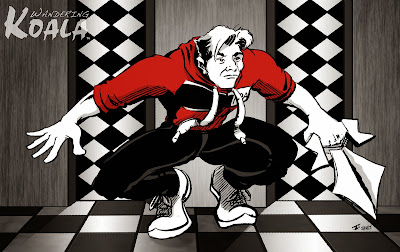 It's amazing what a difference style makes to a work. One can use the same drawing technique and basic design approach and yet come up with three completely different looks that almost appear to be from three different people all because of a change in style. 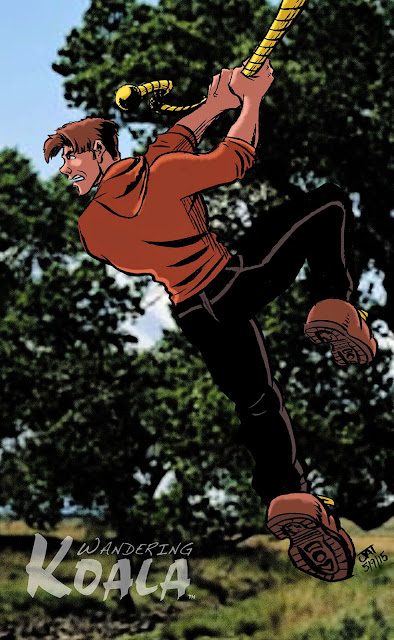 Style has a huge influence on a work. It it the first thing that the viewer notices. It's a close tie between style and subject for the major reason someone is drawn into a work. A unique enough style can even cover up a multitude of artistic blunders and weaknesses, at least for a short time. 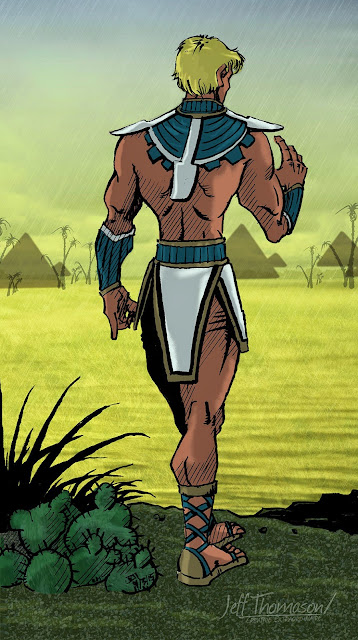 And yet style also puts a work into a pigeon hole which both creates and limits the audience and potential uses for a work. Ironic.

The three illustrations above were all drawn with different tools and colored with different programs in different styles. My overall drawing style still pulls them together as being done by me because it is pretty strong and distinct, and yet there is some nice variety and experimentation going on.

Most of the time I post sketches and works in progress, but I thought I'd mix things up and post something I actually get paid for. Below is a poster I designed for a client on the west coast for his lobby. Enjoy! 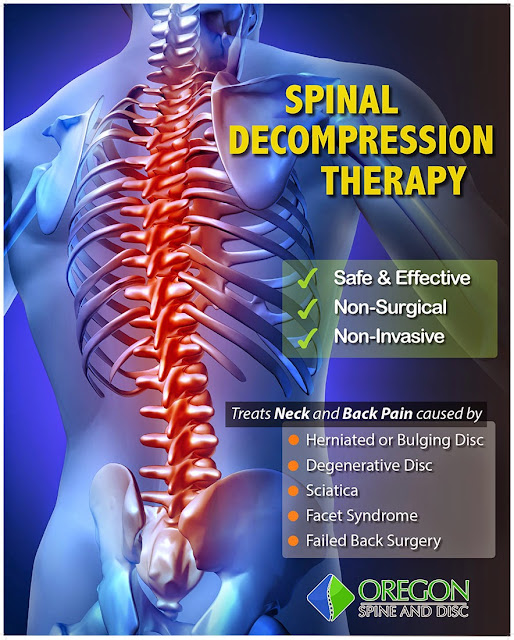 Daily Comics - The Past and a Possible Future 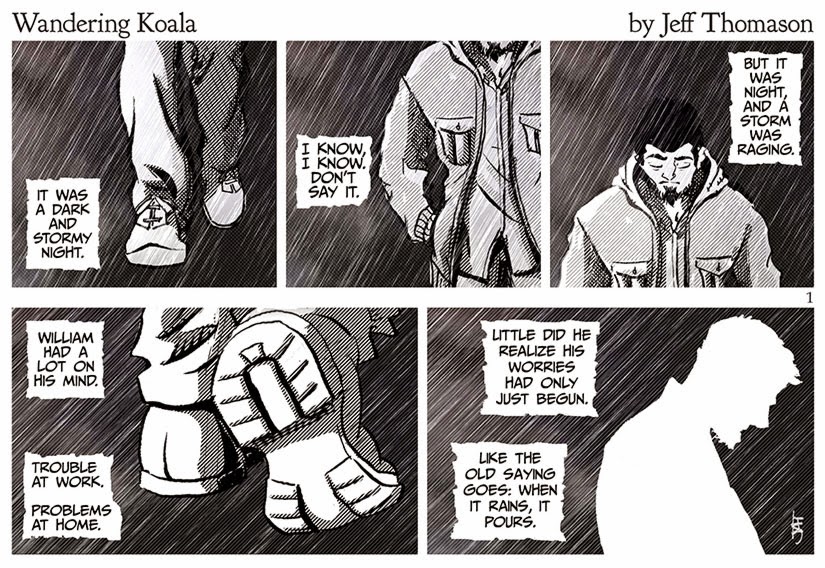 A century ago the newspaper was THE source of information and entertainment for most Americans. During the first half of the 20th Century, papers were featured a large and glorious comics section filled with some of the greatest illustration at the time such at The Phantom by Lee Falk, Flash Gordon by Alex Raymond, Wash Tubss & Captain Easy and Buz Sawyer by Roy Crane, Terry & the Pirates and Steve Canyon by Milt Caniff, The Spirit by Will Eisner, Krazy Kat by George Harriman, Dick Tracy by Chester Gould, and so much more. Each day readers could follow the beautifully rendered adventures in glorious black & white.

Today, sadly, papers are a dying bread and the few comics they carry are pretty rough and amateurish gags by comparison. But they don't have to be. Thanks to the Internet, daily comics have a new home and a chance to find a new audience. And without the limitations of print and size, they have the ability to blaze new trails. But they also have the ability to take what was great about the past and build upon it.

The two daily strips above were inspired by the brilliant Buz Sawyer comic from the master of daily comics, Roy Crane. I've never really worked with any sort of patterned greyscale before. It really adds a different look. Just one more of my many experiments.