Christmas is coming, and it's nothing to be scared of 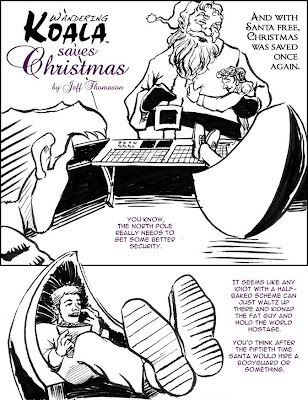 Why, yes, I am working on a new Christmas story.

I guess the idea for it came from a few places. First, my brother had commented how half the Christmas specials involved Santa being kidnapped so Christmas would have to be cancelled. He pointed out Santa's need for better security. Then I was watching Inspector Gadget Saves Christmas around Thanksgiving, and I realized so many shows' titles ended in "saves Christmas".

That got me thinking about what saving Christmas really means. It isn't about rescuing Santa from the villain of the week. We don't need Santa for Christmas--it'll go on just fine without him.

No, the real enemy of Christmas are those who would remove Christ from it and from your life and mine. Now, they know a direct assault would never work, so they attack from the side using something good as their weapon--respect. They claim we should respect those that don't believe in Christ by not mentioning him at this time. Respect is a good thing, but that doesn't mean it can't be used for something bad, and this is an excellent example of putting something good to a not-so-good use.

The truth is we should respect others' beliefs, and they should respect ours in return. It's a two-way street. Respecting their beliefs does NOT mean we should hide our beliefs. That isn't respect--it's ignorance.

This is Christmas, not "the holidays". The only reason the season exists is because of Christ, not Santa, gift giving, family gatherings, or anything else. There is nothing wrong with acknowledging it. It does not force your beliefs down another's throat, nor does it in any way attack another's beliefs. Those are lies spread by those who don't like what Christ taught, because it directly conflicts with bad behaviors they are engaged in and don't want to give up.

So don't be afraid or ashamed to say "Merry Christmas" this year; you will offend almost no one. And if someone says "Happy Holidays" to you instead, don't get upset--that isn't what Jesus would do and really isn't saving Christmas.

As for format, I recently reread a Spirit Christmas story by Will Eisner. I've always been impressed how he was able to fit more story into seven pages than most people these days do into a full 20-page comic book. It's a testament to his great storytelling. I wanted to try and do something like that. His stories were also in the newspaper so a wide audience could enjoy them, not just comic book fans. So I'm going to post my story for free around the Internet so all can enjoy.

Saving Christmas isn't about rescuing Santa, but putting Christ back into it. And that's what my story is about. Wandering Koala Saves Christmas should be out in a week or so. If you like it, be sure to share it with your friends and family. And don't be afraid to let me know what you thought of it--I'm always open to comments.