Parody of the old Hostess Ads 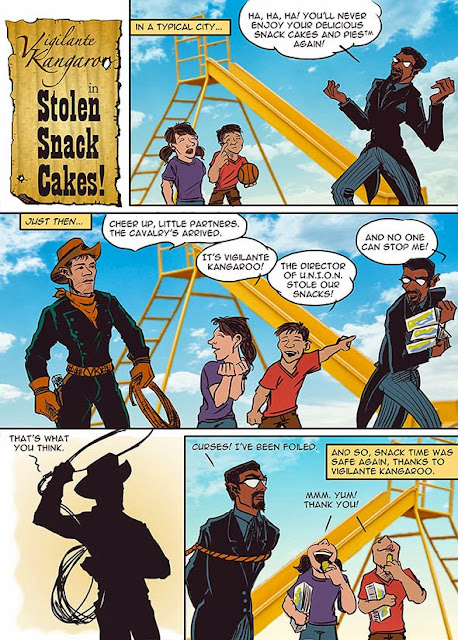 Once upon a time, comic books were written for a general audience. It didn't take long for someone decided they should be for kids, and they were dumbed down. Ads reflected this readership.

In the late 70s/early 80s, Hostess advertised their delicious snack cakes and pies in the pages of comic books with one page stories where a silly villain (with an equally silly name) stole the Hostess treat and a superhero had to stop him and get the treats back. It usually required little work, and at the end the children enjoyed their treats. They were fun ads fondly remembered by those who read them. (This was long before my time, and I only discovered them in back issues and people's reminiscent's on their blogs and in letter columns.)

With Hostess once again in the headlines with the "Sweetest Comeback in History", I decided it was time to bring back these ads, but as a parody. (I'm amazed I was the first one to think of this.)

The above comic is a page from the upcoming Wandering Koala Digest 1, which will be available October 16 and can be pre-ordered now. This page was created entirely digitally (except for the photo of a slide which I found online in the public domain). The rest of the comic was drawn with a stick, but there'll be more about that in the coming weeks...