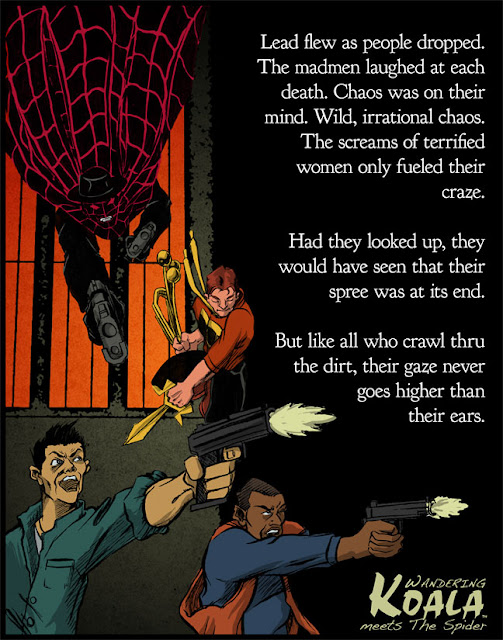 This is a second in a series of Wandering Koala team ups with some of my favorite pulp heroes and pulp-type characters. The first was Jak Phoenix.

The Spider was one of the most popular pulp fiction heros of the 1930s and 40s. He was created in response to the popularity of The Shadow. By day he was Richard Wentworth, wealthy criminologist who regularly consulted for the police. At night he put on a wig and fangs and stalked those who plagued society as The Spider, Master of Men. He carried two 45s and used them regularly to kill lawbreakers. Like most pulp heroes, he predated Superman, Batman, and the other costumed characters by several years.

The Spider also appeared in two 15-chapter cliffhanger movie serials, The Spider's Web in 1938 and The Spider Returns in 1941. He was brilliantly portrayed by Warren Hull who also played Mandrake the Magician and The Green Hornet. The Spider Returns was originally written to be the sequel to the 1940 The Shadow movie serial, but legal squabbles killed the project. Since The Spider was more or less a competing company's version of The Shadow, filming the script with The Spider instead was an easy fit.

I was first introduced to The Spider by a cover illustration by Jim Steranko on a book called The Spider: Robot Titans of Gotham reprinting two Spider stories sitting in Barnes & Noble. I had never heard of the character before, but I had recently discovered that a certain style of art I've always loved was called Pulp Art and this was part of that. So I bought it. I was impressed that the story began with an attack and the action never let up until the end. It's rare an author dares do that.

I also was impressed by his girlfriend Nina who was truly an aeser cognito or perfect compliment for him. When most people talk about a "strong female role" they aren't talking about a strong, confident woman but a rude, duplicitous, witchy female who tries to do everything she can to be a man by having his job and his bad habits. Nina was 100% woman, very feminine, very pleasant, and very nurturing. At the same time she was very strong--not tough--strong. She had principles and values and held to them even when it wasn't convenient or beneficial in the short run. She was confident and loyal. She stood by Wentworth and even risked her own life to save others. She is a true strong female role model. She was very much like the best versions of Wonder Woman--the rare times the writers get her right such as William Moulton Morrison's original run and the Linda Carter TV series. More writers need to take note.

I did more research and discovered there were two Spider movie serials. Reviews online praised them for the number of guns that were fired. Being the fan of movie serials, I had to have them. At the time there was a company that had acquired several film rolls and had transferred them to DVD and sold them on eBay. I bough many, many DVDs from them. In this version, The Spider didn't use a wig and fangs, but a hood and cape with a spiderweb pattern. I loved this look the best, and that's the one I used in my illustration.

The illustration was sketched with a 2B Staedtler pencil, penciled with a Papermate Sharpwriter #2 pencil, inked with a brush and sumi ink, and colored in Adobe Photoshop CS. The building was constructed in Google SketchUp and rendered in Corel Painter X.