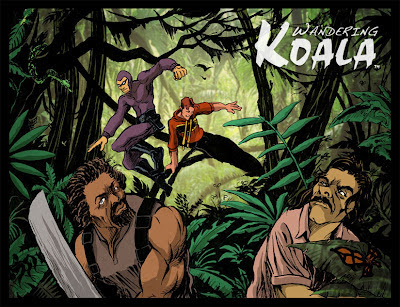 This is the third in a series of new pulp fiction team ups. Previous match ups include The Spider and Jak Phoenix.

The Phantom was created by Lee Falk, who also created Mandrake the Magician, and appeared in newspaper comics. The original Phantom was hijacked by pirates and swore an oath that he and his descendants would fight evil. Most stories center around Kit Walker and his girlfriend Diana Palmer.

The Phantom appeared in a movie serial, comic books, a major motion picture, animated cartoons on television with other King Feature Syndicate characters and in his own show as a futuristic version, and mini-series on SciFi. He wears a purple costume and carries guns. Because he didn't actually originate in the pulps, some don't consider him a true pulp hero, but he had the mood, style, and sense of adventure that fits the genre. He is considered by some to be the first costumed character or superhero predating Superman by several years because he had a costume. I still consider Superman to be the first, because it was his introduction that launched the whole genre and spawned so many imitators.

I've liked The Phantom for quite a long time. A guy in a purple suit running around with a dog shouldn't be exciting and enduring, but the character is. Moonstone published an anthology of short stories with illustrations by Ruben Procopio a few years back that was great. I'm currently reading reprints of the old comic strips which are continue to impress me with their draftsmanship and engaging stories. It was while reading those that I got the idea for this series of Pulp Hero team ups.


The illustration was sketched with a 2B Staedtler pencil, penciled with a Papermate Sharpwriter #2 pencil, inked with a brush and sumi ink, and colored in Adobe Photoshop CS. The building was constructed in Google SketchUp and rendered in Corel Painter X.

You can read more adventures of Wandering Koala in his latest adventure Wandering Koala uncovers the Sixth Figure. You can follow The Phantom in pretty much any format you like short of radio dramas.