Art Philosophy: Is the Pen mightier than the Brush? 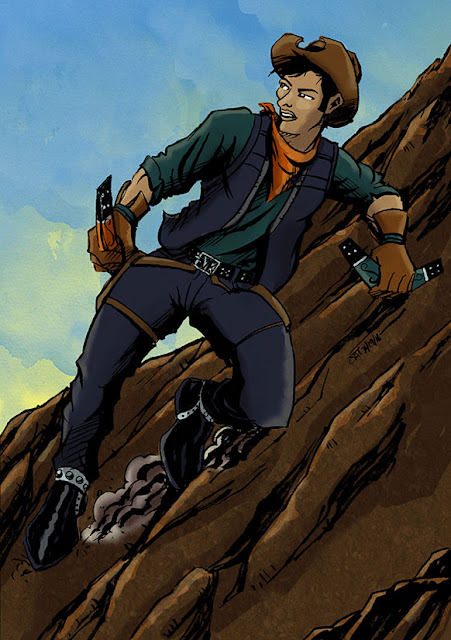 You've probably heard the old saying "The pen is mightier than the sword," but what about the brush?


Let me begin by defining terms. By pen I refer to words (creative writing, business/professional writing, critical writing, etc) either written or spoken. By brush I refer to visual art (illustration, painting, photography, sculpture, etc.). These tools may be used separately such as in a novel, poem, or painting on a wall. Or they may be used together such as in an advertisement or storybook.


Often English and Writing teachers and so-called "experts" will tell you to "show, not tell" implying that painting a visual picture in the mind is better than explaining a situation with words. They claim this creates a more vivid picture, evokes feelings, communicates ideas, etc. that mere "telling" just can't. This suggests that the brush is mightier than the pen. And this from proudly professed wordsmiths.


But then I've read many statements by comic book writers/artists that get all excited about creating a completely wordless issue (all start out as artists illustrating other people's stories) and then complain about all the limitations and difficulties they face not being able to put in simple captions such as "2 hours later" or "the next day" because while you technically can show these concepts visually, they take up a lot of space and aren't always clear. And in movies you see words used at the beginning to set the scene, at the end of "based on a true story" summing up how the story really ends, and throughout the movie even when we can visually see when and where we're at. This suggests there are times the pen is mightier than the brush, and this from artists first who later write.

So the simple question does not have a simple Yes or No answer. There seems to be times and situations when one is better than the other. So what about the meatier parts of the story? And is a combination of both better than the sum of the parts?

The Book was Better


Most movies it seems are either remakes of older movies or adaptions of books, plays, comics, etc., so there is a book or other written source to compare it too. And more often than not people who have both read the original and seen the adaption adamantly claim with absolutely no hesitation the book was better. Why is that? The book only had words, the pen. The movie had both visuals and words, both the brush and the pen. So shouldn't the movie always be better?

This may seem like a paradox, until one considers there are other factors involved. First, books tend to require several hours to read meaning they have more time and space to tell their story. Movies are, with very few exceptions, 1 1/2 hours to 2 hours long meaning something has to be cut, and usually a lot of somethings. Second, movies also tend to want to do something different than the book to justify its existence and because it is a different medium. I've seen direct adaptions to the screen and was always very disappointed. There are things film does very well and you have to make changes to take advantages of these. A lot of times people don't like these changes or resent them. Third, while books are just words, they can paint a mental picture, meaning they can mimic the brush and use it's strengths. A lot of times people complain about certain things being left out or not as well developed. This tends to be the narration or thoughts of the characters that are clearly spelled out and explored in great detail. Movies don't do that as well both because of form and time.

These examples have complimented the matter further providing arguments for both sides while creating a third side.

I don't know much about Art, but I know what I like


Unlike math, science, engineering, IT, or other fields of study, art has a large measure of subjectivity you just won't find when adding 2 to 2. This subjectivity seems to throw a monkey wrench into the works. Someone may love a work of art because it brilliantly exemplified the principles of design while another person hates it because it's a picture of a dog and he hates dogs. This subjectivity tends to contribute a rather large undue influence over an otherwise objective evaluation of a work. This explains why the same book or the same story can appear on both a 10 ten list and a worst 10 list. There are some people that are snobs for one thing or another (such as book snobs that insiste the book is ALWAYS better even when it isn't or physical is better than Kindle edition even if they are identical). One can say, "well his or her opinion is only his or her opinion and doesn't matter," but it does--to him or her.  That opinions shapes not only thoughts but judgement and enjoyment.

The answer to the original question isn't as important as the journey to answer it. Through the journey one learns the strengths and limitations of both the pen and the brush and how external factors and forces influence them both. Using this knowledge, one will be better equipped to best communicate whatever story, message, emotions, etc. one has to spread. And isn't that the most important consideration for both a writer and an artist?