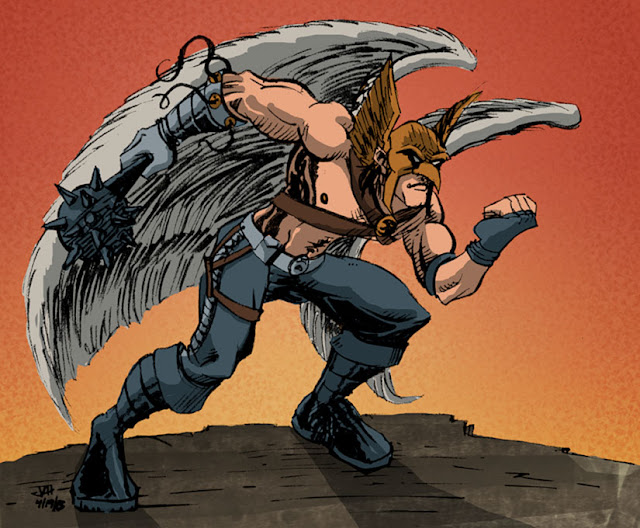 You've probably noticed most of my artwork is of original creations. That's not by accident. While I love watching, reading, playing, whatevering other people's creations, I don't really enjoy writing or drawing them. At least not most of the time. But every once in a while I wonder what my interpretation of another's creation might look like. You probably caught a previous serious of Wandering Koala meeting up with other famous characters like The Spider, The Phantom, Jak Phoenix, Lobster Johnson, Todd McFarlane's Spawn, and The Heckler by Keith Giffen. Those were really fun to do. So I decided to try another set, but this time just focusing on the characters from others.

Hawkman is a character I never liked until DC Comics' big Zero Hour event. They transformed Hawkman into a really cool character, and I picked up several issues. It was written by William Mesner-Loebs and drawn by Steve Lieber, both people whose work I usually enjoy. In their version, Hawkman was actually the combination of generations of Hawkmen and had supernatural powers. I'm not sure why others didn't enjoy it as much as me, because it's become a pretty forgotten chapter in the character's history.

I drew this work with my usual Staedtler 2B pencil, inked it with a Crayola marker (the original broad stroke kind) on Strathmore Sketching paper, and colored it in Adobe Photoshop with a few textures in Corel Painter. I'm really happy with how it turned out. I'm also amazed at the line quality one can get with a Crayola maker. Who says Jamba Juice isn't an inspiration for the arts!