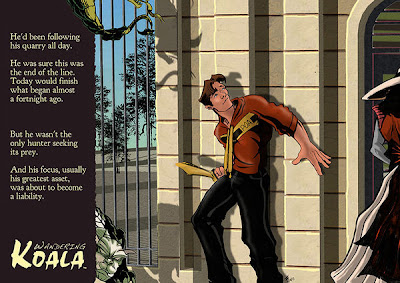 And it is done! The first draft of the latest Wandering Koala tale (currently titled Modest Proposal) is finished!

It's an apocalypse virus story that I've been kicking around for a while (I even started writing a version a few years thinking it would be my third novel, but the story didn't go anywhere). I was inspired to write this when I started reading Contagion (a story arc in Batman comics) when I was a teenager. There was a TV movie with a similar theme soon after that solidified it.

The title Modest Proposal is an interesting one, because while I've read the famous Jonathan Swift essay, it didn't even cross my mind until I was almost finished with the first draft and looking for a title. The working title was Disease, but that just didn't sound compelling enough. I also thought about calling it The Third Horseman (or Fourth or Fifth) but that sounded too unoriginal. Then I thought of Final Solution since that sort of fits the plot, but World War II and Nazis have been so overdone that I try to avoid them. That's when A Modest Proposal popped into my head. The prologue definitely has some similarities and parallels, so I decided to go with it for now. (And anyone searching for the essay may 'accidentally' stumble onto my book, a bonus.)

Of course, now I have to revise, revise, revise, so the title could change. I doubt the story will, because it's already been thru so many drafts and versions that I'm pretty sure this is the one. It reads and feels like a Wandering Koala story. The last one, The Green Bull, didn't. That's why it didn't make it into paperback and why the site wasn't redesigned using artwork from that story.

And the image above has nothing to do with it other than they both feature everyone's favorite Silent Wanderer. The inking was a Zebra disposable brush pen and the background is a Google Sketch Up model that has been heavily painted over in Corel Painter.