Exploring the mysterious caverns and caves below the ground 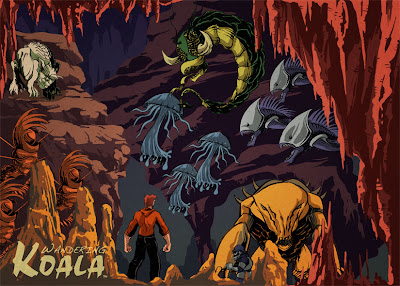 I've always been intrigued by images and stories about caverns and caves below the earth. Maybe that's why Mole Man is one of my favorite villains--it certainly isn't because of his powers or stories that have been told about him.

While exploring a new digital painting style, I thought the style would lend itself nicely to rock formations. And it did. Then I had to decide what to fill the caverns with. After all, it isn't the rocks alone that make these stories so interesting, but the exotic creatures and plants one finds down there. So I created a collection or unseen beasts based on the works of George Méliès and a gargoyle. The colors are the palette I've been using from old Steve Canyon covers. The characters were inked with a Zebra disposable brush pen and colored in Adobe Photoshop.

Overall, I like how it turned out, but it isn't exactly the style I'm going for. Back to the drawing board.