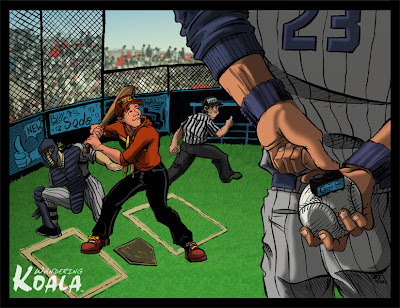 I don't like baseball--playing it or watching it--but I do think it's visually interesting and makes great art. So I decided to make art with it!

This was inspired by a collection of old comics I recently purchased. Back in the early days of the golden age of comics, superheroes (or costumed characters as they were called back then) would appear in anthologies, World's Finest and Comic Cavalcade, and share the cover doing some mundane task like playing baseball, waterskiing, or walking a tightrope in the circus. Until World War II, and then they punched out the Axis. I always liked those covers (the everyday and the propaganda ones). I thought Wandering Koala would work well in a similar situation, so I drew it.

As usual, I drew this with a Staedtler 2B, inked it with a paint brush and sumi ink, and then colored it in Adobe Photoshop. It turned out well. I just with I could bring myself to use hard lines instead of the more painterly look. One of these days. I just found a whole bunch of great old Steve Canyon covers...