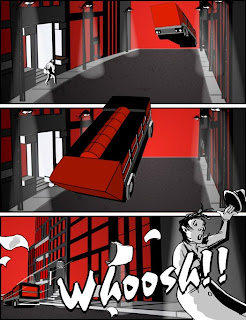 So I've begun a new comic. But it's not really that new. This is the third time I've tried writing/drawing this story, but I think this time it will work.

The story was inspired by two things. First, an old victorian ghost story called The Phantom Coach, which I found in a Dover dollar edition of short stories and absolutely loved. The second is a night I rode the bus in Alegrette, Brazil with a couple of friends. There was such energy that I knew I had to write a story about it sometime.

For this time I decided to try a style I've always loved but never been brave enough to do. Also, I decided to do the whole thing in the computer including the line work. This presented a few interesting challenges. I had completed several pages, but they looked so stark and lifeless, so I went back and added textures and a few gradient tricks which really helped warm them up. It's taken a long time to find the write settings in Corel Painter to create the line I was looking for. And the buildings and bus were constructed in Google Sketch Up. It took me a while to refine the models enough for the comic. They still look too computer generated, but for this stark style I think it's OK. For the next comic, though, I'll have to do better. And the font is a free font called Anime Ace I found on 1001Fonts.com.

I'm trying to get the whole story finished and published before Halloween, but it is taking longer than I thought it would. Keep your fingers crossed!