The Muses Are NOT Amused 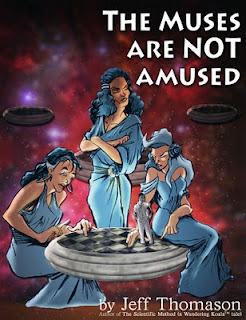 In college I was an English minor. One of the classes I took for it was a creative writing class in which we wrote an essay and a short story. The teacher used a method developed by Nyberg. You start with a turning point, then write about the scene, then turn it from first person to third person, and create a fictional story from it. I wrote a story and thought it was the greatest thing in the world. Then the file went missing.

A few years later, I found it. It wasn't as good as I remembered. So I reworked it and added a fantasy-horror element to it. It's currently on sale as Smashwords in every eBook format for FREE. (I'll probably start charging money for it in a couple of weeks.)

The cover took me quite a while to come up with. I've been wanting to combine brushwork characters with Photoshop created objects and a photograph background. I like it, but I'm not sure if this is the direction I want to go.