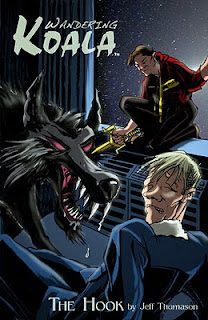 I've always loved the format of children's storybooks, where they have a picture on one page and the words on the adjoining page telling the story. I've never understood why nobody creates books like that for adults. Comic books and graphic novels are close, but I think something that was written so you only needed the words or only need the pictures for the story would be stronger. (Greg Rucka did create a miniseries released thru comic book stores called Elektra & Wolverine: The Redeemer in this format, and I thought it was brilliant. I used it as a model as well as a book by Jim David called Garfield: Babes & Bullets.)

So I decided to create that. My first story is called The Hook (a Wandering Koala tale). It's about 23 pages of story (small type) and 24 new illustrations with a full color cover. I'm really proud of it. It's a story I've been working on for a long time, and I even have an almost finished comic book version of it. A few panels of the comic made it into the story. Can you guess which ones they were?

Right now I've only published it electronically thru the Amazon Kindle Store and SmashWords (which supplies Barnes & Nobel and the Sony eReader store) so you can find it in any format, including a text file or web page. It's only $1.29, which is a steal. I'm hoping to write a whole slew of short stories. Once I have a dozen or so (or maybe a half dozen) I'll collect them into a paperback.